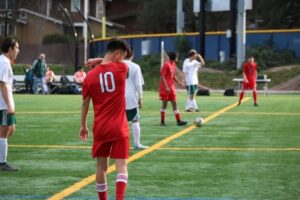 Although high schools around the county have canceled or postponed their athletic seasons due to COVID-19, many club sports have remained active during the pandemic. One of the most popular soccer clubs in the Bay Area, De Anza Force, has continued to do limited training while adhering to social distancing protocols.

After taking a two month break during the initial lockdown in March, Force resumed socially distanced training in cohorts of seven to eight players.  During the short break, Force coaches remained engaged with their teams through weekly Zoom meetings consisting of group workouts and tactical discussions.

Junior Aidan Costello, the center back for Force’s Premiere team, said the coaches did an effective job of keeping the team morale high considering the unexpected situation.

“It was weird having the last training for months and not even realizing it,” Costello said. “But getting to see my team a couple times a week to work out and talk, even if it was on Zoom, was pretty cool.”

After practices were approved to resume by the county in June, Costello’s team, along with all of Force, went back to socially distanced training sessions that were focused on tactical work and fitness. The extent of contact between players was limited to passing, and for several months, goalkeepers were not allowed to participate in team practices.

In October, the county briefly permitted clubs to return to limited contact, and Costello’s team was able to scrimmage and do possession drills. After the county’s return to purple tier in November, however, current training is just as restricted as it was during the summer.

“The most fun part of training was getting to do contact drills with your teammates,” Costello said. “With practices only centered around individual technical work, it definitely takes a lot of the fun out of soccer.”

Nevertheless, Costello has noticed that his team’s overall fitness has improved during the pandemic. His coaches have assigned players running exercises during the weekends, and socially distanced sprinting drills during training have become more frequent.

Junior Andrew Choi, who plays left defender on the same team as Costello, said along with improved physicality, his team’s technical skills have greatly developed over the past few months.

“Prior to COVID, most of our training was centered around tactical play and we didn’t focus much on the technical aspect of the game,” Choi said. “Now that we can’t really do anything else besides footwork, everyone has become more of a technical player than they were before.”

Despite the training centered around social distancing with players and coaches, both Costello and Choi agree that as the pandemic continues, athletes are becoming more complacent about maintaining a 6-foot distance with those around them. Additionally, their training location, Twin Creeks Sports Complex, has multiple teams playing on the field at once, making it difficult to socially distance.

Several players on their team have taken a break during the pandemic out of safety precautions, and while Choi will do the same if conditions get too unsafe, he currently embraces the opportunity to continue playing soccer.

“I’m grateful that I still get to socialize and play soccer with my teammates,” Choi said. “It’s been really good for my mental health; just the fact that we get to train as a team a couple times a week has kept our morale pretty high despite the hard times we’re in.”