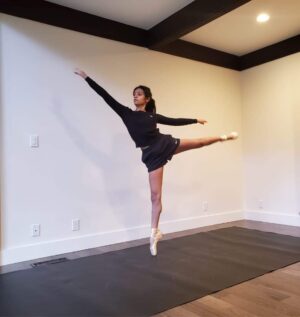 Junior Navya Desai stepped back onto the rectangular strip of dance floor in her living room as she logged onto her Zoom ballet class. Along with the 300 dancers in her ballet company, Desai was rigorously preparing for the Santa Clara Recreation Center’s December production of “The Nutcracker.”

Desai has been participating in ballet classes since she was 8. Her class consists of 32 other dancers and three instructors.

In previous years leading up to the winter performance, Desai would practice three times a week, each session running for two hours. Since the pandemic began, the studio scheduled practices for 45 minutes on Saturdays along with a 45-minute technique class in preparation for the winter performance of the holiday classic.

“We finished learning the choreography in early October, so we’re just running it over to clean it up,” Desai said. “But dancing on Zoom is a lot more independent, so it’s hard for teachers to actually notice what you’re doing wrong.”

Instead, multiple people were given each part in order to keep the performance engaging even in an online setting. The cast plans to record individual segments of the show and compile it into one production.

“Each song is around six minutes, so our teachers decided to assign up to ten dancers per role,” Desai said. “This way, it prevents people from just staring at one person dancing on Zoom for a long time, which would get really boring.”

While Desai’s passion for dance has not waned since shifting to online classes in the spring, she does acknowledge the challenges that practicing online poses.

Unlike in-person classes, asking for help via Zoom does not translate as easily, and learning complicated combinations is difficult. The lack of socialization with other dancers has also been a challenge. Desai especially misses the effortless chatter that would happen throughout class.

“Sometimes you don’t know what you’re doing, and there’s no one to turn to in order to get clarification,” Desai said. “It’s just so quiet to dance on your own, but I’m trying to overcome it.”

Desai said her love for ballet has kept her motivated throughout COVID, and she sees herself continuing to dance for the rest of high school. She also has high hopes of her spring recital being in-person and practicing with other dancers on site.

“Dancing is a really good outlet for me whenever I’m stressed, which is why I’ve stuck with it for so many years,” Desai said. “Even though the performance will be online, I’m still super excited to see the production that we put so much effort into come together.”