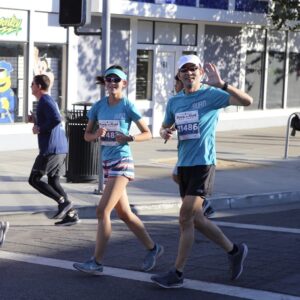 Our heart beats rose to 150 bpm with just one kilometer left. After an hour of running with no rest, we were finally prepared to race through the finish line of the San Jose Rock ‘n’ Roll 10K, my first race ever.

There were stars in my eyes, but I was too concentrated to feel any exhaustion from the running. I saw flashlights from the camera crew. I heard the distant storming crowd. I was so used to cheerleading for my dad that this feeling of accomplishment was overwhelming.

My dad and I both got our medals that day about two years ago. We were both excited, but my dad was especially proud, since he saw his daughter persist to the finish line with him.

My family and I moved from Beijing, China to Saratoga about three years ago, and that is when dad started to train with me.

Of course, receiving a medal wasn’t as big of a breakthrough for my dad as it was for me. He is an experienced runner whose best marathon time is three hours and eight minutes. He started his running career 10 years ago and went on long runs into the desert. At his peak, he would run 112km in four days. I was 6, and I thought he was crazy.

I remember almost crying my heart out when he shaved his head and boarded a plane to the desert in Gansu, a province in China, but I came to realize that running brings him joy. Running is the only thing that allows him to escape his anxiety and experience true happiness.

So far, he has run 16 full-length marathons. All these years I have been watching him in admiration. My dad promised me that I would also feel the overwhelming joy he felt before. My goal is to be like him and cultivate the same love for running that has propelled him all these years.

When I was in the eighth grade, we used to run about three miles to downtown and through the neighborhood once every three days. The next year, my dad would wake me up early in the morning before school, and we would run on the Saratoga High track for 40 minutes. As schoolwork began taking up my time, our training started taking place in the afternoons.

Balancing school work and hobbies is often difficult, but what running has taught me has made my experiences worth it by far. My attitude toward life changed as I learned to never look back but always have immense hope for the future. The future can be near, like racing through a finish line, but it can also be distant, like what I want to achieve in the next few years as both a runner and a student.

My dad will always lecture me if I do not go run with him, and there are days that I want to give up. But he pesters me to an extent that I would no longer bear his complaints, so I get up and run. This is how we have persevered, but it has also allowed me to realize the importance of running. There is so far only one thing my dad taught me about running: It is fun, so if I am not enjoying it, then I have not trained enough.

I have participated in three local races over the course of these last two years: the Santa Rosa 5K race, which I ran in eighth grade, and two Rock ‘n’ Roll 10K series in San Jose. I aim to finish the Rock ‘n’ Roll half-marathon series with my dad this year when the threat of COVID-19 passes.

For my dad and me, time is not important as long as we persevere and have fun together. Our happiness begins whenever we are on the road together.