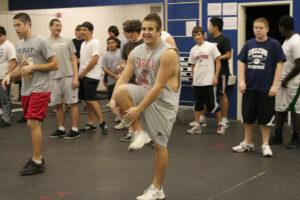 Junior Greg Johnson and other football players train in the weight room on a recent afternoon.

When students enter the weight room, they probably don’t realize it was once home to an auto shop class.

English teacher Bill Peck, who graduated from the school in 1971, said students used to bring their cars in and they would work on the vehicles all day, fixing mechanical errors and learning a valuable skill in the process.

One of the former teachers of this class is current MAP teacher Tony Palma who reintroduced the class as an elective in the late ’90s and taught it until it ended in 2003.

“I wanted students to understand the basic concepts and principles of automobiles,” he said. “We talked about the basic history of cars, how cars were made, how the engine works and the basic fundamentals of cars.”

The class was taught partly in the wood shop and partly outside in the area that is now the weight room. This posed problems for students when there was bad weather that prevented hands-on work.

“The bad part about [holding the class outdoors] was that if there was [bad] weather, we couldn’t do any work,” said Palma. “But When we were outside, we had the kids working hands on with the cars, changing oil and doing basic car maintenance.”

The green Volkswagen and Oldsmobile that still remain outside the weight room are remnants of this time. Although it is uncertain, it appears that the cars were left at the shop and abandoned by their owners. The cars were never towed away so they have remained on campus since.

Some cars, however, were not lucky enough to have been ignored. During Peck’s days as a student at the school, he submitted his own 1940 Chevy to the shop for repair. After neglecting the vehicle, he returned to find out that not only was his car not fixed. It had been towed away and destroyed.

“I guess you could say that the lesson I learned from [auto shop] was to never leave my car in the auto shop for too long,” Peck joked.