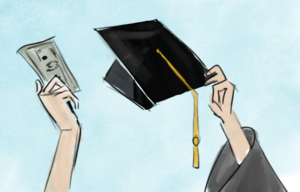 Photo by Annie Liu
The number of students who do not receive federal financial aid for college after graduation must change.

In 2017, more than half of eligible need-based aid applicants in 10 states, including Illinois and Delaware, did not receive any financial support for college. The students in those states are not alone: In the same year, more than 900,000 qualified financial aid applicants in the U.S. were turned away due to a lack of state funds.

While financial aid is not the only way to pay for higher education, the alternatives — qualifying for merit scholarships, working during school, taking out unsubsidized student loans or delaying going to college entirely — are not always feasible paths for students looking at bills in the tens of thousands.

While spending on financial aid by colleges increased by 21% pre-pandemic between 2014 and 2017, the money spent on merit scholarships grew nearly double that, increasing 37% in the same time frame. The problem is that this merit aid often takes away financial aid from those who truly need it.

According to a 2019 report by the National Center for Educational Statistics, “students in the highest 25% income range received a greater amount of third-party, non-federal, merit-based aid ($11,300) on average compared with all other income levels, including those in the lowest 25% income range ($7,500).”

Many merit aid programs assess students based on inequitable standardized tests such as the SAT and ACT, which the UC system dropped the use of in 2021 after they were proven to discriminate against certain groups.

Students with less affluent backgrounds are at a disadvantage as wealthier students generally come from better-funded schools which prepare them better for standardized tests, and wealthier students are also able to afford test-preparation services.

Other factors that impact merit-based scholarships, such as GPA and extracurricular activities, are also problematic. High performance in class correlates with a high GPA — but it is also known that expensive private schools tend to have higher grade inflation than public schools.

The same is true for extracurriculars: While some students may have time to work on their nonprofits (which hopefully don’t suddenly disappear after college applications) or study for academic competitions, others may have to work or help around in the house to support their families, and thus may not be exposed to such opportunities.

In theory, tuition discounts, an often proposed alternative to merit scholarships, should help college become more affordable to students. However, with discounts, colleges should lower tuition for every student, and the high costs still disproportionately hurt less affluent students, so the money used by colleges to lower tuition would be better spent on need-based financial aid.

Determining eligibility for scholarships based on merit requirements is simply unfair to lower-income students who are not only hurt in the college admissions process due to the emphasis on standardized tests but also continuously hurt after entering college due to the popular “bait-and-switch” model, where financial aid shrinks significantly after freshman year.

A study by the National Bureau of Economic Research revealed that the HOPE scholarship, a form of merit-based aid offered to Georgia residents, actually increased ethnic and racial gaps in enrollment. Similar results occurred in other merit programs, such as New Mexico’s Lottery Success Scholarship and Tennessee’s Education Lottery Scholarship. The research proved that merit-based aid actually exacerbates the racial gaps in college attendance rates, since low-income, non-white students are less likely to qualify for the aid and thus pay higher costs.

Federal programs, colleges and institutions offering merit-based scholarships should change their current systems. All programs should enforce an income ceiling as an eligibility requirement. It has been shown that throwing money at wealthy students does not do much for enrollment or graduation rates, but by funding financial aid programs, the money will actually go to helping worthy students who need it.