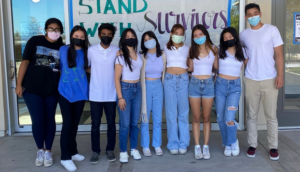 Photo by @cocshs
Photo of Culture of Consent, “wear[ing] white and denim to stand with survivors in solidarity.”

On Oct. 25, the Culture of Consent task force sent an email titled “Including Trigger Warnings in Curriculum” to many teachers, urging them to include trigger warnings before covering sensitive movies, photographs and discussion topics in class to avoid student distress.

The email almost immediately received backlash from teachers. Some felt targeted, as the emails appeared to be individually sent to select teachers. Others didn’t like its tone or the presumption that they weren’t looking out for their students’ well-being.

In the email, the senders introduced themselves as “a team of students and staff committed to dismantling rape culture and creating a supportive space for survivors on our campus,” but they did not reveal their names.

Acknowledging the need for discomfort in education, the task force claimed to “not want to conflate trigger warnings with a coddled or censored education” — instead, they said trigger warnings can help students make informed decisions. They suggested teachers create alternative activities for students who feel uncomfortable with the material.

The email specifically mentioned the English 11 Honors screening of “Twelve Years a Slave” as potentially triggering, adding that the consent form to watch the movie was insufficiently explicit about sensitive material, and that an alternate assignment should be made available to students.

English 11 Honors teacher Natasha Ritchie, who shows “Twelve Years a Slave” as part of her curriculum, felt that this example didn’t fit well, as there was already an alternative assignment available. However, she acknowledges there may be benefits to using written warnings instead, as she currently prefaces the screening with a verbal trigger warning. She recommends students to present research supporting the usage of written warnings.

“I’m pretty sure I’m aligned with [the group] on their overall intentions,” she said. “I just think in the current political climate, a lot of people who are not teachers are suggesting what we should be doing, so I think some teachers felt that particular letter was encouraging us to change curriculum, and I’m not sure that was the intent of the group.”

Following the backlash, Culture of Consent members worked with several teachers to write and revise an apology for the letter, attempting to address most of the teachers’ concerns. In the email, they listed every member of the task force both in the text and in the signature and apologized for “forceful wording, anonymity and the general poor execution of our email.” Teachers were generally appreciative of the apology, albeit with minor concerns over the email still individually addressing each teacher.

“With everything nowadays, you have to make sure you collaborate with everybody before you start sending things out,” Special Education teacher Dan Wallace said. “It’s a learning lesson. I thought their apology was very appropriate.”

In addition to the task force’s apology email, principal Greg Louie also sent a response to all of the teachers, acknowledging their concerns and apologizing on behalf of the task force. He plans to work with the Culture of Consent commission in the future, meeting every month to “discuss any plans, activities, and forms of communication.”

“Though I know many of the students and I know that the  intentions of the students on the Culture of Consent Task Force were good, the execution of their requests and messaging has room to improve,” Louie said.