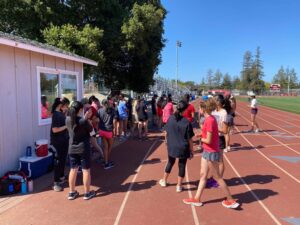 Permalink
To make up for last year’s six-week season lacking official meets, both teams are back to intense training routines

Last year’s record: The team did not run any official meets.

Recap: The girls and boys cross country teams ran together in a shorter season last year due to COVID-19 restrictions.

After having a shortened combined season last spring without official meets, the cross country teams are enjoying a fresh start in the 2021-22 season. Coach Danny Moon will lead the girls’ team for the 13th year, and Ian Tippetts will continue to coach the boys’ team.

Last year, both teams were limited to competing with one or two other schools, many of whom had limited or no JV teams.

“We had races inside the school last year that were basically loops around the campus, which were fun,” said senior Amoli Vanavadiya, a co-captain for the girls’ team. “Still, it’s nice to come back this year with more variety.”

While the boys’ team has seen a significant decrease in participation from the 2019 season, with only 18 runners in total between JV and varsity, the girls team has 53 runners, a number that roughly matches pre-pandemic levels of participation.

“We have a really solid team this year, especially on varsity,” said junior Elizabeth Stoiber, another one of the girls’ co-captains. A majority of the juniors who had run CCS in freshman year, including Stoiber, junior Elsa Blom and junior Isha Goswami, have returned this season.

On the boys team, star player and boys co-captain Dance, who has been a strong asset to the team since his freshman year, continues to lead by example. Previously on June 19, Dance placed third for the 1600 meter with a time of 4:12 during the 2021 track season’s CCS Finals.

Currently, girls’ practices typically involve a mixture of 3- to 5-mile runs, including exercises such as Oregon Drills and core workouts. Boys’ practices have also implemented regular weight training and 7- to 9-mile weekend runs on top of their weekday practices.

“For our returners, the goal is for them to get faster,” said Kathy Tippetts, the assistant boys’ coach. “A lot of them have put in the miles over the summer and you can already see that.”

To get athletes back into shape, working on speed through interval workouts and hill repeats, which involve running fast for certain amounts of time with purposeful rests in between, is a priority for both teams.

“I want everyone to get their feet back on the ground again since we had a whole year off due to COVID-19,” Moon said. “My goal for the team is to get everybody through the league meet without being injured.”

Although there have not been any mask restrictions so far, both teams anticipate masks to be strongly recommended during meets for anyone not actively participating in races. The teams are also continuing to host combined team nights, to encourage team bonding, create a high-spirited environment and most importantly, foster a love for the sport.

“I just want them to enjoy running,” Kathy Tippetts said. “That’s the goal — to push these kids to become lifelong runners.”