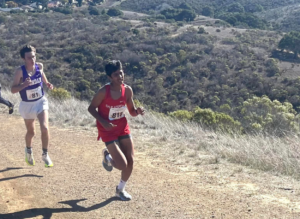 Photo by Kathy Tippetts
Sophomore Pranav Rajan, who ran a PR of 17:34, races at Crystal Springs during CCS.

Permalink
Despite being short two runners due to COVID-19, the boys’ and girls’ cross country teams ended the season successfully.

The cross country teams ended their season with the first round of CCS at Crystal Springs in Belmont City on Nov. 12. The course was approximately 2.95 miles, with rough dirt trails and steep hills, and the team ran in the division four race.

Coach Ian Tippetts worked with the CCS runners by combining a variety of high-intensity track workouts such as Oregon drills — where the athletes run in a figure-8 shape with segments at different paces — and sprint workouts. Additionally, runners trained at Rancho San Antonio Park, a steep hiking trail in Cupertino, with easy-paced 3- to-6-mile runs.

“I had a mental block and was worrying too much during races,” junior boys’ captain Jacob Merrill said. “But Saturday morning runs with team breakfasts afterward were memorable because those were the days when I enjoyed spending time with my teammates.”

Normally, the top 14 runners at SHS compete in CCS, but this year there were 13: seven on the boys’ team and six on the girls’ team. For the boys’ team, senior Wasil Khan, juniors Merrill, Raghav Rajan and Steven Sun, sophomores Tas Long and Pranav Rajan, and freshman Jack Tong raced. For the girls, seniors Isha Goswami, Elizabeth Stoiber, Miranda Yee, sophomores Richa Kandlikar and Anisha Rahut, and freshman Annika Gho raced. Senior captain Carolyn Wang and her sister, sophomore Kathy Wang, tested positive for COVID-19 three days before the race and couldn’t compete. However, Gho — who placed No. 6 the JV league finals race on Nov. 1 and trained with the CCS runners under Tippetts’s request — was added to the girls’ CCS team.

“I think I did pretty well considering this was my first time running in CCS and competing with the varsity girls,” Gho said. “I PR’ed more than I expected so I’m satisfied with that as well.”

Despite the setback on the girls’ team, they were able to place No. 7 out of 26 schools, along with the boys’ team who placed No. 6 out of 23 schools.

“My mentality during the race was to just go for it and to stay relaxed while moving forward,” Stoiber said. “When people passed me I focused on trying to stick with them for as long as possible until I reached the finish line.”

For Stoiber, this season was especially memorable because it was her last one. One of her most special memories include winning top-25 medals during the RAM invitational with Rahut, who placed 22nd and Goswami, who placed 28th.

“Neither of us expected to place that well, so it was really fun to achieve that with my teammates,” Stoiber said.

Although no runners qualified for States, the team reached new heights and potential as a result of their newfound diligence and dedication. Along with rising stars like Gho, they hope to see even more success next season.

“The team atmosphere changed very much since it combined girls and boys,” Merrill said. “I think the whole team improved greatly this year and I can’t wait to see what happens next season.”