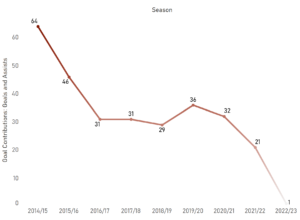 Photo by Anirudh Iyer
Ronaldo’s goal output has fallen off a cliff in the last year or so — could this run of form signal the end of his career?

Permalink
For over a decade and half, Ronaldo was on top of the world. After refusing to come off the bench in a recent victory for his club Manchester United, it looks like Father Time has finally caught up.

Portuguese striker Cristiano Ronaldo, 37, is undoubtedly one of the best soccer players of all time. Among the leading goalscorers in the history of the game, he is a five-time winner of the Ballon D’Or (the official “best player in the world” award) and a league winner in England, Spain and Italy. He was also European Champion six times with club and once with country. With these accomplishments, Ronaldo has essentially conquered the sport.

Recently, however, it has not been rosy for the Portuguese player. Having had his wish to leave his club Manchester United rebuffed by the team’s higher echelons due to fear of losing out on his off-pitch value, Ronaldo arrived to preseason weeks after his teammates in poor spirit. With a desire to contend for Europe’s highest honors in the elite Champions League and with United set to play the 2022-23 season in the second-tier Europa League, Ronaldo felt he was above his club.

However, despite his pleas to leave Manchester United, no club attempted to take the legend, with his desired wages and growing list of frailties only magnifying. United manager Erik ten Hag had no choice but to find a way to integrate the disgruntled Ronaldo into a team that was gelling in his absence, perhaps feeling freedom without the mercurial striker’s polarizing presence.

Though it is widely reported that Ronaldo had a great season in last year’s Premier League (English soccer’s first division), where he scored 18 goals and assisted three more, a more detailed analysis suggests otherwise. Ronaldo’s contributions weren’t evenly distributed across the campaign; he got off to a flier with four goals and an assist in his first seven league games, but followed that up with months of patchy form, where he registered only three goals and two assists in his next 12. A couple of hat tricks — games where he scored three goals — at the tail end of the campaign when United’s terrible season was all but over pushed Ronaldo’s tally to 18, only confirming the gloss over a poor year.

In addition to inconsistent performances, Ronaldo’s conduct was rightfully put into question a number of times during the 2021-22 season, most notably when he refused to show up for United’s defeat at Manchester City, despite not being injured. Rumors speculate that Ronaldo made this decision upon being told that he would not be starting the match.

This season so far, however, Manchester United has looked far better than last and demonstrated this particularly in matches without Ronaldo. On Oct. 19, they beat London-based rivals Tottenham Hotspur in a pivotal match. Rather than scraping by as they did against the same opposition last year, the Red Devils dominated Tottenham from start to finish, sustaining pressure on Spurs’ goal for virtually the whole 90 minutes of the game.

Perhaps United is a better team without Ronaldo. The alleviated pressure of having to always find their star seems to have benefited Ronaldo’s countrymen. This is especially true of attacking midfielder Bruno Fernandes and right-back Diogo Dalot, who dazzled against Spurs without Ronaldo’s presence breathing down their neck.

Maybe Ronaldo has struggled to come to grips with his decline — he attempted his trademark stepovers virtually every match, and saw little success in passing his defender. His trademark “knuckleball” free kicks are firmly a thing of the past: Ronaldo’s free kick stands at around a shocking 2.74% success rate over the last 5 years.

However, Ronaldo still stands over every free kick United earns, exuding his confidence of old. The fans in the stadium, however, don’t expect the ball to nestle in the roof like it often did in the past. Now, Ronaldo’s free kicks are met with a unanimous expectation of failure, whether it be an easy save for the opposition goalkeeper or a looping ball into row Z of the ground.

Mental and physical deterioration, both of which happen to virtually every athlete as they age, have heavily affected Ronaldo. Perhaps the loss of his son in childbirth a couple months ago has set him back mentally. It’s possible that Ronaldo has lost his formerly omnipresent love for the game that played such a big role in his success.

With his inability to run at speeds anywhere near his peak, his renowned vertical leap a mere shadow of itself and his formerly exuberant dribbling all but gone, perhaps it is time for Ronaldo to hang up his boots. When he does decide to step away from the game, though, he will be remembered as an all-time great and an icon of soccer.