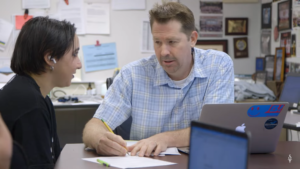 Photo by Santa Clara County Office of Education
Special Education teacher Brian Elliott meets with his seniors one by one at the “senior conference table.”

Permalink
Special education teacher Brian Elliott, who has taught at Saratoga High for 11 years, shares his highlights and teaching methodologies from working individually with each student and their family to the school community at large.

Special education teacher Brian Elliott learned in June that his colleagues had voted him to be the Los Gatos-Saratoga Union High School District’s 2022 Teacher of the Year (TOTY). Colleagues noted his dedication to his students and excellence in all parts of his job — qualities that can be seen in a brief visit to his classroom, Room 403.

Right above the door is a black and white photo of a racing horse — a metaphor used to compare students venturing out to the “race of life” and rushing out of the classroom. To the right are a series of posters featuring the U.S.’s founding members and their associated disorders (for example, Ben Franklin had dyslexia). To the left, a huge snapshot depicts a man (from a movie that Elliott can’t remember) who dons a sweater with the word “college” imprinted on it, and an informational poster about the Silicon Valley Career Technical Education college preparation program hovers above. The room even has a printer, which he dubbed the “heartbeat of the school,” to ensure that students have access to all resources at all times. As always, calm music plays in the background.

All aspects of Elliott’s classroom facilitate and remind his students of their long-term goals, which often starts with going to college.

While Room 403 reflects the nature of other classrooms on campus through its equipment and design, Elliott makes a constant effort to expand beyond its four walls and interact with all members of the school community, including students, parents, families and other teaching staff. As head of the special education department, a former basketball coach at the school and a teacher of the on-site credit recovery program with special education teacher Danny Wallace, Elliot naturally traverses nearly all groups of students on campus.

“A huge part of my classroom is that it is a safe place for students to come to not only learn, but to feel comfortable on campus,” Elliott said. “A good special education teacher has to interact with their community, family, school and individual students.”

As part of the Special Education Individualized Education Plan (IEP) team, a legal document that ties staff to a responsibility of delivering their student’s education, Elliott said he considers his students’ families to be a large part of that team. He meets with parents several times a year over the phone, on Zoom and in person to design specific academic program services and goals aligned to their student’s independent academic situations.

In that sense, Elliott and his special education colleagues are not only classroom teachers, but also team leaders and case managers of their students’ academic programs, monitoring all services and goals. He also described his role as one similar to that of a consultant with the general education teachers, since he works with them to implement accommodations for students’ success.

Kathryn Liu, the parent of one of his students, said that Elliott always values parent input. Liu said he is always willing to work with mainstream teachers, the special education department and parents to find the best way to provide support.

“He has the ability to see the best in [his students]. I’ve worked with Mr. Elliott for six years, and one of the things I’ve appreciated most is that he is the ultimate team player — he can always work collaboratively to meet an individual, school or district goal,” Liu said in an interview with the district. “He really has a heart that is so genuine and he has such a passion and care for each student and never seems to be tired.”

Part of the process of creating specialized pathways and goals involves fine-tuning his instructional style to fit every student’s motivations, Elliott said.

For example, Class of 2022 alumnus Nitin Venkataratnam, who enjoyed watching movies to further visualize the concepts he learned in class, said Elliott would always give him new recommendations like documentaries about the stock market and the 1980s economy to support his interests in finance. Together, he and Venkataratnam would discuss the character development, plot sequence, theme and point of view of the films to better understand how movie script writers use nonfiction and fiction stories to convey information. Venkataratnam watched movies like Tom Hanks’ “Big,” Robert Redford’s “The Natural,” and financial literacy documentaries like “Big Short,” “Wall Street” and “Moneyball.” He now studies Business and Finance at Menlo College.

Some of his other students are interested in dinosaurs and road construction, for which he recommends reading for pleasure to improve writing and thinking abilities. Other students are intrigued by the niche aspects of the inner workings in motorcycle mechanics. Elliott encourages these students to analyze motorcycles in a systematic way through the scientific method, which facilitates further expansion of this interest to core education sectors like math and physics. By helping students acknowledge real-world connections to their passions, Elliott teaches to their strengths.

The whole process of specializing the curriculum to suit each individual’s needs takes 20 to 30 hours each week, in addition to in-class teaching.

Elliott also attributes a large part of winning the TOTY award to the dedicated professionals he has worked with. He said the award is “an honor that would not be possible without them.”

One of his favorite parts during his teaching career, for example, was team teaching Biology with Jennifer Lee, a Saratoga Class of 2002 alumna and former SHS teacher who now teaches Advanced Science Research and mathematics at Los Gatos. Together, they would prepare creative plans for individual learning needs, providing students who prefer typing with appropriate technology to assist their strength. They would also deliver lessons in multiple modalities to suit others with learning disabilities or mental health challenges.

“She was very open to creative ideas for different ways to deliver lessons,” he said. “Having a colleague work beside you allows for the chance to get feedback on your practice. You have two sets of eyes and we were able to collaborate and talk about how we could target a group of students for better teaching.”

Along with teaching the science curriculum for the special education department, Elliott has also helped students in an afterschool, eighth-period on-site credit recovery program along with Wallace. The course is offered to all students in the district who are referred from their guidance counselor, and aims to recover credits that would not look favorably on the college transcript to ensure graduation.

Last year, the program helped over 45 students recover roughly 300 units of credit. Since its debut two years ago, it has had a 100% success rate for participating students.

“We’re both special education teachers, so we’re able to support all curriculums with our global perspective,” Elliott said. “I think what’s made it so successful is that it is a safe place for students and we build relationships with them beyond just the credits they have to recover.”

Another aspect that Elliott considers critical to his teaching philosophy is building relationships with students beyond their academic life at school. His students often share about their extracurricular activities such as part-time jobs, interscholastic athletics, plays or musical performances — events that Elliott attends to support his students. Moments when students try out something new are his “absolute favorite,” as it shows that they trust him as a person.

“Sometimes families will say, ‘your name was mentioned 15 times at our dinner table last night, and we know because we weren’t prompting our son or daughter that you’ve done something really significant in their life,’” Elliott said. “That’s always a special experience — being talked about outside of the classroom, in a family environment, when you’re being brought up as a person.”

He largely attributes his teaching philosophy to the experiences he has had with his teachers growing up. For example, his eighth-grade teacher at New Brighton Middle School, Ken Richter, “clearly practiced what he said and taught,” while some of his other teachers weren’t as passionate about teaching. The gap encouraged Elliott to go into teaching and “increase the odds” for students to learn under the mentorship of a teacher who cared about them and their success.

“Mr. Richter and my other coaches and teachers emulate living by example. That’s much more powerful than what comes out of what you say. I learned [from them] that it’s your actions that students observe,” he said.

In addition to teaching special education and students in the on-site credit recovery program, Elliott has also coached various basketball teams at school from 2018 to 2021. The different perspectives of the three departments have broadened his exposure to all aspects of the school community and enabled him to interact with students, families and staff beyond the walls of his classroom.

Those interactions involve aspects of his personal life, too. Financial literacy is a big part of Elliott’s passion project, and he often offers advice to students, when applicable, and to other teachers on campus.

“One of my personal goals is being a life-long learner,” he said. “Everyone can learn. The traditional educational system doesn’t necessarily work for everyone.”