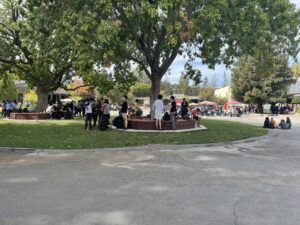 On any given school day during lunch, one can gaze around the quad and notice an abundance of sizable groups of over 10 students bunched together closely, conversing or hunched over someone’s phone. Many of the students in these groups are maskless and seem to no longer be afraid COVID-19.

In fact, since students can’t eat inside anymore, the masses of students in the quad looks even more crowded together than how they were pre-pandemic. Though the vast majority of students are probably vaccinated and there have been no cases within the school so far, it still scares me slightly.

When students returned to school this year, most, including myself, seemed to be much less afraid of the pandemic. Some even seemed desensitized to it.

There are understandable emotional and scientific reasons this happened. As people become used to living with the risk of the virus without ever catching it, it’s only normal for them to take it less seriously.

In addition, California, especially Santa Clara County, has done a great job with containing the Delta variant from causing a huge COVID-19 resurgence compared to many other states where cases spiraled out of control. This is a testament in part to mask mandates and high vaccination rates — SCC boasts an 83.5% full vaccination rate of people ages 12 and up — which greatly reduces transmission and severity of cases.

Although being less afraid of the virus is understandable, students should still be slightly more careful as the virus has not gone away. The rate of new cases and deaths has stayed relatively constant at a rate higher than in the spring and summer months for about two months now.

For example, the Delta variant caused a moderate surge, bringing the new case rate just higher than it was in the summer of 2020, but not close to the big winter surge.

Especially pressing is that the Pfizer and Moderna vaccines begin to lose effectiveness starting a few months after a person is fully vaccinated, meaning that over the next few weeks, vaccine effectiveness will start dropping for people who got the vaccine before April.

A quick Google search reveals that 16.1% of the state’s residents were vaccinated before April and 30.2% before May. For those people, vaccine protection is dropping.

Though booster shots will be available soon in California, there will likely be more skepticism surrounding  it.

This is problematic because it may cause upticks in cases and deaths through the next two months. Students should be more conscious of the risk and try to avoid being maskless when in close proximity with others in order to prevent a surge from happening until booster shots are widely administered.

A cautionary tale can be found in Israel, which recently experienced a COVID-19 surge, despite being one of the first nations to vaccinate the majority of its population by March 2021.

While there was a rapid decrease in the number of new cases starting in January, cases skyrocketed once again in July as the Delta variant broke through dipping vaccine immunities.

Taking more precaution will be especially beneficial and stress-relieving for students who have older relatives or family members with underlying health issues at home. While COVID-19 is not life-threatening for the vast majority of the vaccinated population, it can still be dangerous for the elderly, especially as vaccine protection wanes.

The Delta variant of the virus is especially worrying. The CDC warned it was magnitudes more contagious than the previous strain — “as contagious as chickenpox” — and that vaccinated people could still spread it.

If a large number of people disregard the risk of COVID-19, we could see a surge in cases since we are in the gap of time between vaccine effectiveness starting to wane and booster shots being administered.

With many students being comfortable with gathering in large groups again, if one student happens to catch the virus, they might spread it to multiple other students during lunch or school events if they are not careful. Because of this, one case within the school can quickly turn into many more if students are generally desensitized to COVID-19 risk.

Though the virus particles rapidly disperse in outdoor air, it’s hard to believe that it won’t spread with waning vaccine protection and maskless students squeezed together less than 3 feet apart.

Students should not necessarily stop attending social events like football games or Homecoming, since the rate of new cases has remained steady over the past month, but they should definitely take more precautions such as not sitting side by side at lunch tables.