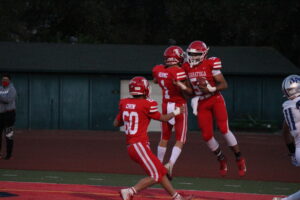 On April 4, girls’ water polo player sophomore Fiona Feng received an email from assistant principal Brian Thompson informing the team that a player, whose identity was kept confidential, had tested positive for COVID-19. All 17 players and coach Courtney Crase-Delp had to quarantine for 10 days and bring proof of a negative test result before resuming practices.

A similar story unraveled with the varsity football team: After a player on the team tested positive for COVID-19 in early April, 52 players and one parent had to be placed under a 10-day quarantine. The team’s season was cut short with a forfeit of a scheduled game against Westmont.

As of April 26, there have been four other COVID-19 scares or quartines for teams.

The first incident involved a student who was placed under a 10-day quarantine after being exposed to COVID-19 through their outside sport.

In the second occurance, all 18 players on the boys’ soccer team were under quarantine for one day after hearing of a positive case from Cupertino High School, whom they played against on April 12; however, according to athletic director Tim Lugo, that decision was reversed because it turned out to be a false positive.

Similarly, both the boys’ and girls’ water polo teams had to quarantine after two Monta Vista High School athletes they played against on April 20 tested positive; this was also a false positive, and the teams resumed practices and games after one day.

Despite these incidents, Lugo said there is no plan to slow down school sports.

“None of this changes anything, as all county and state protocols were followed and none [of the COVID-19 cases] were a result of direct competition,” he said.

While outdoor sports are not required to regularly test, indoor sports teams will continue to do COVID tests three times a week, as the CDPH (California Department of Public Health) requires a result within 48 hours of a game, he said.

Sophomore Seth Hulme, a wide receiver on the varsity football team, found the abrupt end to the season frustrating and felt especially sorry for the seniors whose season ended without any warning.

Despite the disappointing ending, Hulme believes the season was worth it, especially for the seniors. He looks forward to next season and has already set goals for himself: helping incoming sophomores prepare for varsity, working hard in the off-season and scoring a touchdown for wide receiver senior Kelly Huesby.

“When we come back next season, we’ll try to preserve the energy we had this season and carry it over to the next,” Hulme said. “I hope we can have a smooth run next year, COVID-free.”