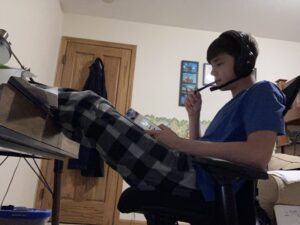 Permalink
Michael Fok takes the side of the controversial rough and final draft testing. Hear what he has to say to support this divisive relic of the COVID year.

In the stressful year of online learning, the novel rough/final draft testing format has revolutionized test-taking. In this system, students take the test during class as a rough draft graded on completion; they then revise their rough draft with an open-book policy to be submitted as a final draft for test credit.

This new form of testing is, without a doubt, better than the standard, closed-book form. It prioritizes learning rather than grades, and gives students more chances to do well.

The rough/final draft system allows students who want to genuinely learn the content to prove their understanding, while also offering a second chance to those who don’t test well under pressure and prefer to do a test at their own pace in a more comfortable setting.

Tests and grades are implemented to reflect a student’s ability, but in most cases, it doesn’t just end there. Grades, and by extension, tests, determine what college someone goes to and the kind of life they get to live.

For that reason, it’s complete nonsense to use traditional testing as a way to measure future success, especially because test taking is far from an equitable way to determine competency. Testing shouldn’t be the primary factor in determining someone’s success in life, so giving more people a chance to succeed is a good thing.

Even with rough/final draft tests, it’s not like the entire test is invalidated because students take it home. Students still have to attempt to complete the test in class, and for the students who write nonsense and then do it all at home, they probably won’t do well on AP tests and other standardized tests. Students who put in effort will be rewarded when they take closed-note tests in the future, as they will be equipped with the study skills to succeed without the crutch of notes or online resources.

Academic integrity violations were a rampant issue during online learning, though hardly an unprecedented one. When presented with easy opportunities to get an A through cheating, many students unfortunately took it without a second thought, especially those in competitive schools such as Saratoga High. This format can essentially eliminate cheating as it places students on an even playing field and helps alleviate the stress of time limits — the exact pressure that causes students to cheat in the first place.

In all likelihood, our future jobs will be nothing like a high school course. There won’t be tests or homework. Different jobs will require different skills, but test-taking isn’t one of them.

Many, if not most jobs, encourage employees to ask questions if they are confused. The internet and its vast resources are open to employees if they don’t remember how to do something in Google Sheets or if their code has bugs.

The new test format takes emphasis away from grades and puts it back on learning, a worthy goal. With a solution at hand, there’s no sense in rejecting it just because previous generations of students didn’t get this improved system.

While the rough/final draft testing style is undeniably less stressful, colleges aren’t likely to adopt it any time soon. High schools have to lead the way by being open-minded to a new mode of assessment — one that encourages self-motivation and a genuine interest in learning. Some colleges may eventually get on board but change takes time and it needs somewhere to start. This is the perfect place and time to do so.