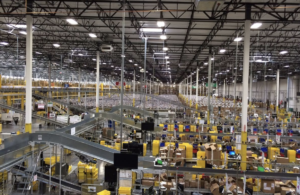 The insides of an Amazon factory which specializes in packaging and delivering products.

The use of fast online shipping websites like Amazon has drastically increased over the last few months due to COVID-19 and according to The New York Times, Amazon has added upwards of 427,300 employees in the last 10 months, bringing its global workforce to more than 1.2 million.

In an account the New York Post, a worker in an Amazon facility outside of Louisville, Kentucky, Emily Guendelsberger, described her experience as “physically demanding” with upwards of 12 hours shifts that include walking totals of 15 to 20 miles every day through a 25-acre warehouse — a distance as long as seven New York blocks. Guendelsberger claims the only benefit she has seen from working with Amazon has been losing 20 pounds. All else has been pain.

To get through the workday, many employees use pain medications provided by Amazon to overcome the staggering brutal conditions. Additionally, Amazon workers are required to carry a “scan gun” similar to those at grocery store checkouts, which not only has a screen that helps with listing tasks, but also has a GPS location tracker embedded in its system, allowing the company to track its employees’ locations and productivity and even deduct pay for using the restroom too often.

These investigations into Amazon have led some people to stop using the company’s services, believing it is their moral obligation to stop supporting such labor practices. Billions, however, continue buying from Amazon, even if they claim not to support the company’s unethical practices, as they believe that changing the status quo is far too difficult given how pervasive such practices are in the market.

Though it may seem difficult not to buy from Amazon during the pandemic, continued purchasing of Amazon’s products will only allow for such unethical practices to continue and perhaps even increase with more demand. People should stop buying Amazon products because continued consumption of their products is what allows these unethical labor practices to continue. After all, Amazon derives the majority of its power from its consumer base and stock price.

Moreover, the issues surrounding the treatment of workers within Amazon factories are not limited to Amazon itself. According to Mashable, virtually all large companies such as Apple, Samsung and Google use cheap labor to meet consumer demands. This cheap labor is allowed due to customers seeking cheaper purchases that are only possible because of unethical labor practices.

The familiar “Made in China” label at the bottom of many products proves this point. In truth,  the inexpensive labor that companies use comes from China, where workers can be easily hired and even replaced for cheaper wages, due to the country’s large population. These workers often endure poor living conditions with up to six people sharing small cramped dormitories despite working for seven days a week and having little to no breaks. Such a situation is only made possible by consumers who buy Amazon’s products and allow the company to enlist such cheap and unethical labor.

To resolve this dilemma and stop Amazon’s immoral treatment of its workers, one of the more viable options to change their practices is to boycott their services.

Having people boycott or at least limit the use of Amazon’s services would impact the company greatly and send a clear message that people do not stand by their practices. There are ways to combat Amazon’s monopoly, such as petitioning for labor unions, but the time and effort put into this would be better spent by simply not buying from Amazon.

Efforts toward petitioning for labor unions — a practice that Amazon has barred from their workers — would allow workers to have more rights, such as improved working conditions, a better quality of life and higher wages, but given Amazon’s nearly limitless resources such a grassroots effort would be easily shut down. Currently, Amazon workers earn about $15 an hour with some benefits such as accident insurance, but these wages and benefits are minimal compared to what would be possible if workers had the protections of strong labor unions. Yes, we would pay more for products, but workers would have a living wage and better working conditions.

So how exactly do you avoid Amazon?  Companies such as eBay, a website that functions much like an auction, do not have unethical labor practices, as sellers create listings of their own items to be bought or auctioned off. The prices can also be haggled with, allowing for cheaper prices that rival that of Amazon. Consumers can also buy directly from the companies that produce the products.

Boycotting Amazon and other similar corporations is the first and most important step to stopping such pervasive unethical labor practices. The use of alternate purchasing mediums, such as eBay, is the best possibility in this current situation and will allow consumers to continue purchasing online without fear of helping a company that continues to use unethical labor practices.