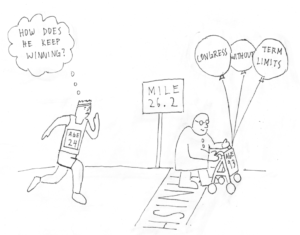 Immediately after the conclusion of the impeachment trial on Feb. 13, Senate Minority Leader Mitch McConnell, R-Ky., said that “there’s no question — none — that President Trump is practically and morally responsible for provoking the events of the day.” Yet when it came to holding an impeachment trial for Trump, McConnell voted to acquit Trump, claiming that it was illegitimate to impeach him now that he is just a citizen — neglecting the fact that he was the one who delayed the impeachment trial until after Trump left office.

This kind of hypocrisy on Capitol Hill is not a new phenomenon. In order to ensure that legislators are more involved with the state of the American democracy than that of the political party they represent, a Constitutional amendment should be put into place limiting senators to two six-year terms and representatives to three two-year terms.

Currently, senators and representatives have no term limit, serving on average about 10 years and 9 years, respectively, with exceptions like Sen. Patrick Leahy (D-Vt.) serving 44 years and Rep Don Young (R-Alaska) serving 46 years — in comparison, life-tenured Supreme Court justices serve for only 16 years on average. With sharp term limits, more people would cycle into Congress, making individuals more committed to America than their own job’s safety.

In some cases, senators’ and representatives’ prioritization of job safety over national interests has resulted in so-called “pork barrel” legislation, in which legislators maintain their role in office by bringing money to the region they represent. For example, since 1991, Sen. Ted Stevens (R-Alaska) has secured over $1 billion in federal funding for Alaska, not including his proposed “Bridge to Nowhere” in 2008 that was projected to cost $398 million. These projects contributed to his status as the longest-serving Republican senator in history by the time he left office — and took tax money and government projects away from non-Alaskan Americans.

These pork barrel projects do little to help America as a whole, instead of burning valuable taxpayer money — they serve only to advance individual congressional interest.

More recently, such actions have taken a toll not only on the American people but also on the state of the nation’s politics. For instance, McConnell has amassed great power as a senator since he joined in 1985. In 2016, he declared any appointment by Obama to the new seat in the Supreme Court to be null and void, and in 2019, he was nicknamed the “Grim Reaper” for his burial of a large number of liberal and bipartisan House-passed bills into the so-called legislative graveyard. McConnell’s blatant prioritization of political party loyalties over American interests shows the importance of reducing the power of individual Congresspeople.

These issues aren't limited to Republicans. In 1994, the Republicans’ Citizen Legislature Act aimed to limit senators to two terms and representatives to six. The overall vote was 227-204, receiving bipartisan support consisting of considerably more Republicans — but short of the two-thirds majority needed for Constitutional Amendments. Democrats generally disliked it because they hoped to maintain the congressional power that they held for straight decades — illustrating the power-hungry nature of the legislative body as a whole.

Some, McConnell included, might argue that elections are sufficient for term limits — if the people vote for a candidate, it must mean that the candidate is the most suitable for that office. However, statistics prove that the true situation is far from this perception: 98 percent of incumbents get re-elected, yet only about one-fifth of the American people actually approve of the job performance of Congress. Because of increased name awareness and pork barrel projects, incumbents have a smoother path to re-election, though it may not mean that they are the most qualified or ideal candidate for the position.

Reducing this “incumbent advantage” through a term limit would also decrease Congress’s dependence on seniority as a qualification for a committee chairmanship. With new people coming into office frequently, lobbyists would be less able to build long-term relationships with Congresspeople, which could potentially decrease corruption.

Congress needs to recognize the immense role that it serves collectively in securing America’s democracy by accurately reflecting the opinions of the American people. If it can’t do that — if its members are only there for their own sake or to worsen the two-party tension — it shouldn’t exist at all.