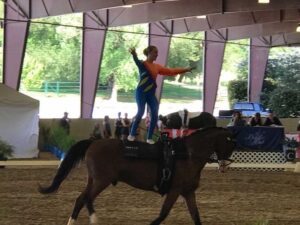 Hubb stands on the back of her team’s horse at one of her vaulting competitions.

Sophomore Maddy Hubb watches in anticipation as her coach lunges her horse,  making it canter in a circle at the end of a rein-like lunge line. As soon as the horse picks up a canter, which is the three-beat gait of a horse, she runs along its side, matching her pace with the horse.

After she has picked up enough momentum from running, Hubb gets ready to mount.

Although the idea of independently mounting a cantering horse is impossible for most, Hubb does so effortlessly, using the surcingle, a leather strap with handles, strapped on the horse’s back to swing herself into a sitting position.

Hubb is a skilled vaulter who competes for the Mount Eden Vaulting Club, located at the Cooper Garrod Winery and Farms in the hills above Saratoga. Hubb was inspired by her preschool teacher, a vaulter and a vaulting coach, to start vaulting in elementary school and has been vaulting for 10 years.

Vaulting is a competitive equestrian sport, commonly described as dance or gymnastics on horseback. Due to the sport’s lack of accessibility (there are only 141 American Vaulting Association (AVA) clubs in the nation), Hubb said that most people aren’t familiar with it.

“Normally when I tell people I do vaulting, they think I mean pole vaulting or they just have completely no clue as to what I’m talking about,” Hubb said.

When competing, vaulters perform a routine of tricks and acrobatics accompanied by music on the back of a horse that is lunged.

In addition to a lunge line, the sport requires additional equipment like boots for the horses legs, a vaulting pad for the horse back, a surcingle, a vaulting whip used to pace the horse and ask it to switch gaits and a bridle for connecting the horse attached to the lungeline. Although Hubb doesn’t own a horse, her vaulting club provides a horse for every age-group team.

Needless to say, the little-known sport requires significant skill and commitment — during the vaulting competition season, Hubb trains as many as five times a week with her team. During these practices, Hubb and the rest of the Mount Eden Vaulting Club focus on perfecting tricks, balance and body conditioning.

While Hubb and her team normally attend competitions in Woodside and travel to national vaulting competitions at the end of the season, the COVID-19 pandemic has greatly affected their competitive schedule.

Starting this past March, all vaulting competitions turned virtual and required competitors to send in videos of themselves vaulting from their home barn.

Toward the end of August, however, in-person vaulting competitions started opening back up with the requirement that all participants wear a mask unless they were performing. Additionally, all vaulting competitions eliminated the team event category, where up to three people perform on the horse at a time.

Hubb said the removal of the team event due to the pandemic has been “really sad because it is one of the highlights of vaulting.”

Although the competition format has changed to accommodate for COVID-19 precautions, the judges still judge the same features as before. All competitor tricks and routines are judged from a scale of 0-10, with 0 being the lowest score and 10 the highest.

Vaulters are usually scored on two sets of moves: compulsory exercises and a freestyle routine. Compulsory exercises are a set of moves picked by a group of officials that all competitors have to perform. The seven compulsory movements recognized by the AVA are the Vault-on (or mount), Basic Seat, Flag, Mill, Scissors, Stand and Flank (or dismount).

During the freestyle portion of the routine, the vaulters choose which moves to perform in a minute-long routine. During the set, vaulters are scored on a 0-10 scale for their routine’s artistic composition, the degree of difficulty and their overall performance.

Although standing and doing flips on a moving horse don’t seem like components of a safe sport, studies have proved otherwise.

A 2014-15 PubMed study followed 233 active members of a vaulting club from November 2014 until October 2015, questioning them every month about sustaining vaulting-related injuries. In the end, the study concluded that the vaulters suffered an average of 2.15 injuries per 1,000 hours of exposure.

This injury percentage is significantly lower than that of leading contact sports, with basketball averaging 14.4 injuries per 1,000 hours of exposure and football averaging 8.4 injuries per 1,000 hours of exposure, it’s also lower than that of non-contact sports such as swimming (4/1,000) and tennis (3/1,000), and compares to that of track and field and golf (both 1.8/1,000).

Hubb, who has broken her foot once due to vaulting, said that despite the potential dangers, she doesn’t spend time worrying about getting injured when vaulting.

“Vaulting is worth the risk because I like the people, I love the horses and with my coaches I know I won’t get badly injured,” Hubb said.