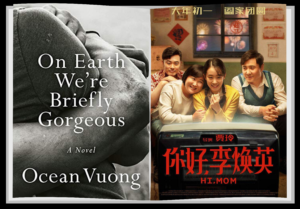 These two semi-autobiographical works dedicated to each artist's mothers helped me better understand my Asian American community and heritage.

A novel that reads like a poem. A letter to an illiterate mother. “On Earth We’re Briefly Gorgeous” is Vietnamese-American poet Ocean Vuong’s 2019 debut novel.

A comedy that induces tears. A meeting with a long-dead mother. The newly premiered “Hi, Mom” is the first movie popular Chinese comedian Ling Jia wrote, directed and starred in.

It was by chance that I came across these two semi-autobiographical works dedicated to the artists’ mothers on the same weekend, but I don’t think either Vuong or Jia left it to chance on whether their respective audiences can stop their tears.

“On Earth We’re Briefly Gorgeous” is an epistolary work written from the perspective of Little Dog, a Vietnamese American boy growing up in Hartford, Connecticut. Employing painfully beautiful language, the novel explores Little Dog’s relationships with the women who raised him: his mother, Rose, who suffers from domestic abuse and PTSD from the Vietnam War, and his grandmother, Lan, who suffers from schizophrenia.

Readers follow Little Dog as he finds peace with his sexual identity through his relationship with a white farm boy who has a drug addiction.

I say “painfully,” because Vuong is not afraid to wield his lyrical language as a scalpel that cuts right into readers’ hearts, sans anesthetics. The aftermath of a war that resulted in more than 2 million civilian casualties is bound to be a difficult topic, and Vuong presents it in its rawest form, discussing racism, violence and loss. He ventures into uncomfortable scenes such as Rose’s forced abortion in which her baby was “scraped” out of her like “seeds from a papaya” because there was nothing to eat.

Reading this book was like being trapped in an amusement park drop tower: I feared every upcoming word because I didn’t know how much it would tear me apart, and yet I couldn’t stop turning pages.

As he does with his poems, Vuong uses potent animal imagery in his novel by first introducing animals with an informative, science report-like passage that juxtaposes the majority of the novel’s ornate language. These facts are then woven into the prose and fused with symbolism.

Vuong illustrates the novel’s characters as fragile monarch butterflies heading home, magnificent buffaloes leaping off a cliff, a cornered moose who chooses to spare their hunter from death as a last act of seizing agency and — my favorite — macaques with skulls cut open, their brains being eaten by men while their still-alive bodies struggle underneath.

Vuong amplified the power of the macaques’ condition by placing it as an interlude in a scene where Lan offers herself as a prostitute for American soldiers, ending the passage with a return to a simple but brutal fact: “The brain of the macaque monkey is the closest, of any mammal, to a human’s.” To me, this is the perfect echo of how humans can inflict such cruelty upon other humans when we are so similar.

Having finished such a heavy book in the afternoon, I wanted something more light-hearted in the evening, and so I turned to “Hi, Mom.”

Despite its impressive box office results in China and its reputation for bringing audiences to tears, I had low expectations for this film, thinking that it’d be like the other Chinese comedies I’ve seen: filled with (not so) subtle CCP propaganda and only funny because of how terribly awkward they are. I was wrong.

Directly translated from Mandarin, the movie’s name is “Hi, Huanying Li,” with Li being the name of the main character Xiaoling Jia’s mother — and the real name of actress Ling Jia’s mother. Initially, Xiaoling Jia believes that she can only make her mother happy through her stellar achievements, going so far as to fake her acceptance into a prestigious college. When Li is fatally injured in a car crash, a grief-stricken Jia finds herself traveling back in time through an antique television to 1981 when Li was just a young woman.

In the 1981 timeline, Jia does everything she can to bring a smile to Li’s face, ultimately deciding that her mother would be happier if she had a better daughter in the future instead of Jia. Thus, Jia alters history as she knows it and tries to set Li up with a wealthy man instead of Jia’s own father. Up to this point, the movie is filled with warmth and surprisingly good humor that startled genuine laughs out of me.

It seemed inexplicable, then, that Li chooses Jia's father over the wealthy man until Jia realizes that this timeline is not her own. It is also a dream woven by Li, who, moments before her death, wants her daughter to find peace. The movie revisits the prior scenes from Li’s perspective, revealing that, throughout the dream, Li was always conscious of Jia being her daughter, and that, as a mother, she feels happy as long as her daughter is happy, regardless of superficial achievements.

For me, it was hard to separate the character Xiaoling Jia from the actress Ling Jia. That’s not a critique of her acting skills — rather, knowing that the plot is largely autobiographical, I find it even more heartbreaking that Ling Jia’s mother will never know that her daughter is now one of the most successful actors in China.

It can be said that, like Little Dog, Jia is also a product of violence. Her parents belong to the generation of the Great Chinese Famine and the Cultural Revolution. The older generation’s humble background culminates in their desire for their children to, contrary to themselves, have chuxi, or the idea of making something significant out of one’s life.

Unlike the elegant language in “On Earth We’re Briefly Gorgeous,” every aspect of “Hi, Mom,” whether it be language — Mandarin with bilingual subtitles — or set, is plain, reflective of the lives Chinese workers led in the 1980s. But this simplicity, stripped of any adornments, is exactly what a mother’s unconditional love is — and what a daughter’s love is.

And can’t the same be said for Vuong’s novel? There is a heavy love between Rose and her son, most fiercely shown by the reason behind Little Dog’s seemingly depreciating name: “To love something is to name it after something so worthless it might be left untouched — and alive.”

In light of the anti-Asian racism of the past year, it’s an appropriate time for us to understand Rose’s reasoning behind telling Little Dog to stay invisible because “you’re already Vietnamese.”

It is my sincerest recommendation that you read “On Earth We’re Briefly Gorgeous.” As for “Hi, Mom,” I understand that language would be a barrier to the majority of the humor, but I’d like to think that the grief — and the power we derive from grief — is universal.