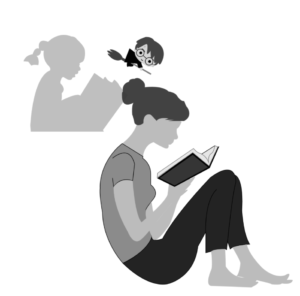 Oi mate, what the bloody hell was that for?

Now some might be thinking, why is she using British slang while talking in an American accent? My only answer to that is I cannot do a British accent.

Randomly yelling out cheers, blimey and bugger off at inopportune moments was the highlight of my two-week-long British escapade.

My middle school family friends made fun of me for getting too into the Hogwarts universe. Apparently, me having read a “children series” that they had no interest in gave them full rein to mock me. Mock me for what, you might ask? For having good taste.

I tried to get them into the series by repeating the iconic one-liners “avada kedavra” (in Voldemort’s voice) and “obviously” (in Snape’s voice) while beating them in beyblades instead of saying “let it rip.” I thought it would add some spice to the game, but the uncultured middle schoolers didn’t appreciate my genius.

I managed to quickly put an end to their teasing after telling them I will fight anyone who says that Harry Potter is for children.

Now, however, I’m discovering I have no other books to reread that my elementary school self loved as much as Harry Potter, but you can just blame my 10-year-old self for being a dull bugger.