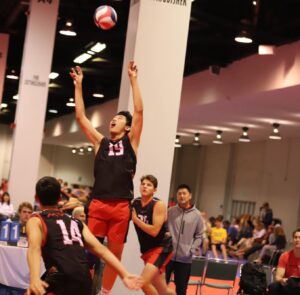 Senior Dylan Li sets the volleyball in a club match last summer. Li, a prospective college recruit, has played volleyball for five years as a part of the Mountain View Volleyball Club.

In June, Brown University sophomore Esha Lakhotia, a 2019 alumna, joined a large Zoom call and immediately noticed the disappointed faces of her fellow squash players as well as athletes in other sports. Fifteen minutes earlier, the team had gotten an email from the university’s president informing them that several sports, including squash, would be cut starting this school year.

The reason: budget problems. In particular, starting in March, many student fees were waived and fan attendance at high-dollar sports like football almost disappeared. In an article for ESPN, Patrick Rishe, director of the sports business program at Washington University in St. Louis, said that in football alone, each Power 5 school would see at least an average loss of $62 million in football revenue, including at least $18.6 million in football ticket sales.

According to the Associated Press, 51 Division I sports, 56 Division II sports and 52 Division III sports have been cut, with thousands of students losing their spot on the teams, and possibly even their scholarships.

“I was really upset when I heard the news because playing squash at Brown and being a part of such an amazing and fun team was the best part of my freshman year,” Lakhotia said. “I felt like it came out of nowhere and we were all really shocked.”

This decision from colleges not only affected college students, but also high schoolers who hope to play some of these sports.

Many student athletes get admitted to their desired colleges through recruitment and sports scholarships. However, when colleges cut sports teams, they also reduced the number of students who can be recruited for a particular sport. Combined with quarantine restrictions on sports, the reduced spots for high school students have made it increasingly difficult to be recruited to play a college sport.

Senior Dylan Li has been playing volleyball for five years, and is looking to get recruited in men’s volleyball.

“Recruitment is happening entirely online this year and because of it, there are much fewer people getting offers,” Li said. “I’m not sure if it’s because of less seats or if coaches are holding off to see players play at tournaments in the future before making the offers, but it's upsetting.”

Currently, two Division I universities have cut men’s volleyball, leaving just 23 Division I schools with the sport. Taking into account that the average college men’s volleyball team has 16 members, only around 370 men get recruited for Division I.

According to Li, one of the most shocking cuts was Stanford’s program

“It’s especially upsetting to see colleges such as Stanford cut its volleyball program because it was a place I hoped to play at,” Li said. “But I can understand why these schools would have to cut programs and there is not much I can do about it.”

Although the decisions were made out of financial necessity, the increased competition and loss of recruitment opportunities bumped  athletes off the path they had been on for years.

“I wish they would have been both considerate to the players and gave them more time to adjust,” Lakhotia said. “Compromises like giving players one last season or maybe allowing teams to fundraise would make everyone much happier.”