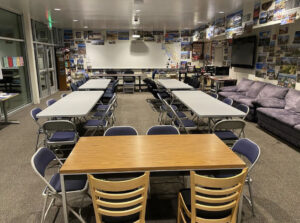 Permalink
Representatives from 70 colleges have been planned to speak to students this year in the newly-setup College & Career Center.

Dozens of students crowded into the College and Career Center (CCC) in late September to attend a Boston University college visit organized by college and career specialist Brad Ward, who had adapted the formerly staff lounge into a warm space for college advice and career planning. Plastered around the walls of the building were a variety of posters featuring more than 300 colleges that Ward had collected in the past 20 years.

With the frequent college visits and Ward’s mindful customization of the center’s furniture and college-planning resources, the center has also guided dozens of Class of 2023 students as they navigate the admissions process.

Currently, the center has planned approximately 70 visits this year, with college representatives visiting from local California to Maine and New Hampshire. The purpose of the college visits, according to Ward, is to give seniors the chance to speak directly to representatives, all who intend on bringing a little piece of their university atmosphere to the Saratoga campus.

“The representatives love our students, [and] appreciate the informed questions rather than questions like ‘how is the food’ or ‘how many students go to the college,’” Ward said. “The only negative is that they’ve sometimes needed to shush our students’ side conversations.”

The range of student attendance for visits this admissions season has varied, with some receiving zero attendance and others — such as the historically popular University of Southern California — hosting around 60-70 students in the McAfee Center. While Ward understands the popularity of some schools, she also encourages students to attend the talks from less-popular universities, as many of them can turn into casual one-on-one interviews that help admission officers remember students.

Senior Michael Jang, whose first time attending a college visit was during the Boston University information session, said the most striking aspect about the visit was the openness and camaraderie within the center.

“I’d never been to Boston before, so hearing what the BU admission’s officer had to say about the school was helpful,” Jang said. “She seemed really humble and knowledgeable, and it helps a lot when I’m in person and listening to people.”

On the other hand, students like senior Jenny Campbell have found that the opportunity to ask questions face-to-face was the most beneficial.

“A major part of what college I apply to involves whether they have a hockey team, so if I want to inquire about club hockey or [another aspect] like research, it’s really helpful,” said Campbell, who plays hockey in the school team. “If you have any specific questions or needs, you can always ask them because the college websites don’t always provide that.”

To further promote the CCC as a warm and welcoming space, both for college visits and other activities including essay-writing and college-advising appointments, Ward has rearranged the center’s setup — including adding soft, sleep-inducing sofas he warns students to “beware of” — in hopes of building a comfortable environment and maintaining a sense of confidentiality for students when requested.

“I keep at least one of the four doors open all day, and I have a plan to make [the building] even more cheerful in the weeks ahead, though I can’t reveal any details about that yet,” Ward said. “I’m also slowly adding things that I hope will be welcoming to those of all races, ethnicities, religions, LGBTQIA+, citizenship, socioeconomic status and so forth.”

In order to maintain the privacy for one-on-one conversations involving students’ college lists, GPA, class schedule, family finances and essay topics among others, Ward has also added tables outside “to make it easier to go around a corner for a quick chat.”

Besides furniture arrangements, Ward has also sought to increase resource accessibility by setting up a new CCC website, improving the functionality of Naviance, and starting the center’s very own Instagram @saratogaccc and TikTok.

Ward appreciates the support from principal Greg Louie and the guidance counselors as she’s worked to increase the visibility of the center, and she’s excited to guide the new generation of graduating students.

“I have been so impressed with our students. They’re so polite and kind, and though on Day 1 of school no one came to the CCC, since then it’s been an ever-increasing stream,” Ward said.