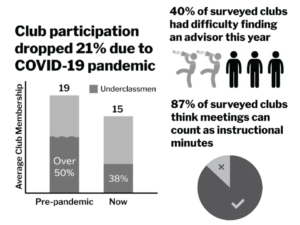 Before the pandemic, students were free to meander through classrooms during 35-minute lunch periods — enough time for club members to participate in activities and finish eating. Club officers encouraged prospective members to join meetings through free pizza and snacks.

Now, under the COVID-19 indoor mask mandate, many clubs are struggling to survive.

After students wait in the lunch line, eat their lunch outside and rush to a classroom, only 15 minutes remain for the meeting, forcing clubs to often cut into the 10-minute passing period after lunch. In academic clubs, this is barely enough time to go over a theory and a short demo or example; in many cultural/service clubs, it’s only enough time for a short slideshow, video, discussion or game.

For club members, attending meetings means sacrificing a comfortable lunch. According to a survey of 15 presidents  of a mix of both academic and cultural/service clubs, membership has dropped from a pre-pandemic average of 19 students to the current 15.

Traditionally, underclassmen are eager to try a variety of clubs, while upperclassmen tend to narrow their focus to a few clubs, especially those they have a chance to lead. But this year, due to unfamiliarity with club culture in online learning, underclassmen make up only one-third of club membership. Several surveyed clubs have no underclassmen, which threatens the clubs’ ability to survive in the next few years.

To solve the club crisis: Use the solution agreed upon by 87% of surveyed club presidents. Allow clubs to meet during the 40-minute non-advisory tutorials, with meetings included in the school’s required instructional minutes.

This proposal would also seem to satisfy the requirements for California instructional minutes. According to the Los Angeles Unified School District, activities “under the immediate supervision of a properly credentialed teacher … with their attendance recorded and reported as part of the daily program schedule” are considered instructional activity. Provided that club officers and teachers carefully keep track of tutorial attendance, club meetings during tutorial should qualify as legitimate instructional minutes.

The proposed tutorial club meetings would be able to last up to 40 minutes (or even 50 if they cut into the following break period), allowing clubs to organize far more meaningful meetings than pre-pandemic clubs could. Longer meetings would enable more in-depth lectures and activities or the possibility of larger-scale projects, such as the Art Club’s proposed mural. They would also facilitate greater participation in events during the school day, such as guest speakers, which tend to occur as after-school or weekend events for clubs such as TEDx and Economics.

Club attendance is sufficient enough to warrant consideration under the school’s instructional minutes requirements. From a poll of 96 students, more than three-fourths of students typically spend tutorials doing activities that don’t require adult supervision, like homework or talking to friends. Surely, it’s possible for both students and teachers to be available for club meetings during the 40-minute block.

A possible concern is that some teachers are already busy during tutorial, and particularly chaotic days (e.g. shortly before a test) would not allow for club meetings. But during typical tutorials, when demand for teachers is relatively low, leaving their rooms open is fairly low-commitment. After all, in the current system, many teachers check in briefly with officers but don’t attend their lunch meetings.

Furthermore, tutorial meetings could also indirectly improve student and teacher engagement in club culture. Less than half of the student body are members of this year’s student Facebook group, where the vast majority of club-related announcements are posted, compared to around three-fourths in 2018-19. Organizing tutorial meetings could potentially spark more interest, and teachers would also have a better sense of the status of their advised clubs through more regular attendance.

Clubs are crucial to the high school experience. One solution is to broaden the list of what activities can occur during tutorial and give clubs the chance to thrive again.