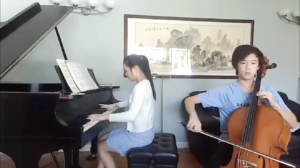 Sophomore officers Josephine Chou, Madelyn Jin, Marcus Kuo and Lily Yang of the Tri-M club held a virtual meeting over Zoom a week after school ended to discuss future plans. The club’s mission is to better the community by bringing music to locations such as nursing homes and retirement centers. Since the cancellation of school on March 16, they, like other clubs on campus, have shifted their activities online and are determining how to achieve their goals.

The club commission has also ended the club year early, and clubs are no longer expected to hold two meetings per month. As a result, the club exit form this year will be due earlier, on May 1. Although clubs can no longer meet in-person, many have adjusted their goals and are working around the shelter-in-place.

In order to contribute to the fight against COVID-19, the Tri-M club has donated 150 face masks since March 16 to the Sunnyview Retirement Community in Cupertino. On April 4, they held a virtual concert for the same retirement home by having the club members send in recordings of the musical pieces and compiling them into a 40-minute YouTube video.

The club is planning another virtual concert for the same retirement home, set to take place on April 26. Instead of a recorded version, the club will play live music through a Zoom call.

The Aspiring to Create English Club, or ACE, still occasionally holds officer meetings over WeChat, a Chinese social media app. The club is made up of Saratoga High students such as president junior Anthony Qin and vice president junior Amy Zhang. Students from Saratoga High tutor Chinese students from Yunan in English, providing free help that enables them to prepare for the Gaokao, China’s notoriously difficult placement test for college. Qin said he continuously contacts club members to check in on tutoring progress.

“Since the teaching is mostly paced according to the student tutors’ schedule, the quarantine actually helped ACE by making more time for our members to tutor their students in Yunnan,”  Qin said. “We now have more time to develop the club and attract new members.”

While some clubs are able to continue club activity, others have put a hold on their meetings and canceled pre-planned events. Red Cross, a service club on campus, has put a pause on their weekly meetings, but they plan to hold one to two virtual meetings to wrap up unfinished discussions and goals for the next school year.

The club had events planned for the spring semester, such as the Stanford Blood Drive, assembling of first aid kits and a guest speaker presentation about disaster awareness, but they are now unable to carry these out.

“Events and presentations we did not get to host this semester will be postponed to next semester,” said junior Allison Ha, president of Red Cross club. “It will make the fall 2020 semester much more hectic.”

Clubs such as California’s Future Business Leaders of America (FBLA) and Speech and Debate focus primarily on competing in regional, state-wide, and nation-wide tournaments. The pandemic has resulted in the cancelation of many of these events, or their transition to online conferences.

The FBLA State Conference, originally scheduled for April 23-25, was canceled, and State competition qualifiers will automatically advance to Nationals. Secretary junior Cynthia Zhang said that it will not have a big effect on the club as a whole.

“Our meetings usually consisted of supplemental lesson plans. Most of the work is done outside of the meetings,” Zhang said.

The speech and debate club also stopped its weekly practices. Tournaments such as Tournament of Champions (TOC) and the National Speech & Debate Association (NSDA) Nationals were moved online and will continue in the form of Zoom meetings. Other tournaments, such as National Catholic Forensics League (NCFL) Grand Nationals and State Quals were canceled.

Although practices are temporarily paused and the format of tournaments is affected, some students continue prepping and competing in tournaments individually. On the weekend of April 17, six students competed in the TOC. Sophomore Selina Chen took first place in Informative Speaking; seniors Adhit Sankaran and Ronak Pai broke octafinals in Public Forum Gold.

“We all join a Zoom room and have our debate over video,” Sankaran said. “The process worked quite well at the TOC last weekend.”

The Women in STEM club, which aimed to close the gender gap in STEM, has also decided to cancel meetings for the rest of the year. The club also planned on hosting a hands-on STEM day for middle school girls on March 21 but was forced to cancel the event.

To accommodate the sudden change, WiSTEM club officers created an Instagram page on April 23, @shswistem, to share STEM activities for younger students to try at home.

Senior club president Kiran Chandresekher also noted that the sudden change has a long-term impact on the club. Current officers had planned to use the last few months of school as a transition period to train incoming officers.

“Without a transition period, it might be harder for the incoming officers at the beginning of next school year,” said Chandrasekher. “But I’m sure they’ll catch on quickly.”