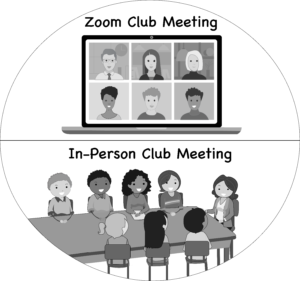 During lunch on Sept. 14, members of Girl Up sat in English 9 and 10 teacher Megan Law’s classroom, participating in a name game. People laughed as students failed to remember the names of all the club members and they passed around a bag of Goldfish. The club has been around for years, but this was their first meeting in person this year.

With school finally back in person, clubs have been given an option to hold their meetings either in-person, on Zoom or a combination of both. According to senior ASB club commissioner Nandini Desai, most clubs, including Girl Up, have opted to stay in person.

Senior Nithya Koneru, an officer from Girl Up, said that meeting in-person interaction is vital to the club’s success. Because many of their activities are centered around discussing serious topics, the officers found that being online made it harder for club members to open up and relate to each other.

“Compared to last year, we have already seen a big increase in participation and can’t wait to get started with our meetings,” Koneru said.

Activities like large group discussions, panels and rallies with other clubs and task forces on campus were impossible to coordinate over Zoom, she said. Being back in person has made these events possible again.

Koneru said that the first in-person meeting of the year displayed a big improvement from Zoom meetings. Students were engaged with each other, and attendance had increased considerably.

“We want to be able to provide a safe space for all individuals, which in an online environment was definitely harder because of the lack of connection you don’t get to build through Zoom,” Koneru said.

While most clubs decided to meet in person, the Genomics and Bioinformatics club has opted for a hybrid approach.

The club is a non-profit that provides competitive opportunities while introducing students to biotech concepts. They have decided to have bi-monthly meetings — one in-person and one online — every Blue Day Friday.

Junior Isha Jagadish, the club’s president, said she is excited to host in-person club meetings and work on projects with the rest of the club members.

“Our club was only accepted in the remote year, so we have never experienced in-person meetings before and virtual meetings have been running smoothly,” said Jagadish, adding that both club officers and members were involved in their decision to have meetings both online and in-person.

During remote learning, 15 members participated online; currently, there are 70 members in the club’s Facebook group.

The goal is to have around 20-25 members attend all meetings after seeing interest spike with the addition of many freshmen and sophomores.

Jagadish said that online meetings worked well with the goals and format of their club meetings. During online meetings, they deliver informative presentations and work on research projects.

“Online meetings were actually very effective, contrary to what most people think, as it allowed us flexibility with guest speaker series, delivering presentations, and playing games like Kahoot,” Jagadish said. “Our online meetings also give students a chance to attend other clubs during lunch, and ours after school.”

She also mentioned the issue of the new lunch schedule, and how the shorter period impacts their efficiency. Jagadish found that the 30-minute lunch period is not enough for a productive meeting, which factored into their decision to host hybrid meetings. While most clubs were extremely enthusiastic about transitioning back to in-person meetings, the Genomics and Bioinformatics club has a different perspective on what works for its members.

“Since there are pros to being online and pros to being in-person, we decided to go hybrid to get the best of both worlds,” Jagadish said. “We’re grateful for the opportunity to be in person and we’re excited to see what it will mean for our club.”