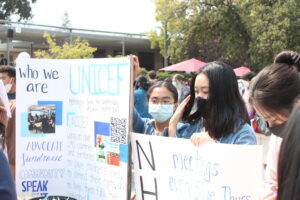 Permalink
Club Rush days increase interest and participation for the 65 clubs on campus.

As soon as the lunch bell rang, sophomore Jay Lim headed from his third-period class in the band room to a bustling quad filled with tables, students and club officers on the first day of Club Rush. As he walked between various club booths, he read the tri-fold posters set up and scanned QR codes to join clubs he’s interested in.

Club Rush is an annual two-day event in early September, where clubs advertise to students during lunch and recruit potential members. This year’s Club Rush took place on Sept. 1 and 2. Clubs were assigned a table to set up their posters and, optionally, provide snacks to incentivize signups.

“Clubs rely on in-person interaction to explain what their club is which can really help gain participant interest,” Desai said. “It also gives underclassmen an idea of the club culture and allows them to sign up for clubs that they want to learn more about.”

During the pandemic, the ASB created a pseudo-club rush system, where clubs created slides presentations for students to browse. However, the virtual advertisement form wasn’t as successful and decreased club participation by “at least a half.”

For example, Saratoga Supermileage, an engineering application club focused on environmental conservation, experienced especially low participation during the pandemic year, forcing them to become an unofficial out-of-school club during the 2020-21 school year.

“The club didn’t get as much coverage, so it was more just a platform for the team leads and project members to meet,” said senior president Kunal Shrivastav, the club’s president.

Due to low attendance, the club could not conduct one of their primary projects: “Bike to the Future,” a challenge for club members to use their engineering knowledge to build an electric bike.

In spite of low attendance, Saratoga Supermileage was reinstated as an on-campus club during early club application interviews this year.

“We’ve received an astounding number of applications, which has made it harder to reject clubs as we see renewed enthusiasm coming out of the pandemic,” Hsu said.

While Saratoga Supermileage club found Club Rush helpful for garnering attendance, other clubs, like Quiz Bowl Club, were less optimistic about the usefulness of Club Rush.

“Club Rush definitely brings in new people,” Quiz Bowl Club president Anthony Wang said, “but I’m not sure how committed members will be. Last year, people actively searched out clubs themselves, so they found clubs that they genuinely wanted to join.”

Many clubs have returned to meeting in-person during lunch, but face complications such as restrictions on indoor eating. Wang said Quiz Bowl meetings will be held online this semester to reflect their online competition environment, but may return to in-person next semester.

Despite restriction complications, Wang and other club officers are hopeful that Club Rush will bring in new members and help revitalize clubs that had trouble finding members last year.

Shrivastav and other club officers are hopeful that Club Rush will help revitalize clubs that struggled with participation last year.

“This year, we will hopefully have an easier time relaying [Supermileage club] to students,” Shrivastav said.