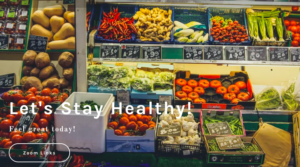 Students and teachers logged onto Healthy Living Club’s culture clash webinar on April 13 where juniors Nandini Desai, Sadaf Sobhani and Jodran Shyh led a discussion of their first-generation American experiences and differences between their familial and personal values.

“We were honest and vulnerable about discussing things like money, career trajectory and parental pressure,” Desai said.

The Healthy Living Club has organized a variety of events in the past few months. These have included Toolbox to Success webinars featuring students, teachers and founders of programs like HAERT, as well as wellness packages, partnerships with CASSY and a health magazine called “Toga Cares.”

With the purpose of contributing to the community, the club has organized food drives, promoted mental health awareness and supported people suffering from nutritional deficits through monetary aid.

“The club is essentially a place where we discuss physical health, mental health and COVID-19 through outreach projects such as Mental Health Initiative and Teta Cares (both non-profits),” Fayad said.

The club held their first Toolbox to Success webinar in mid-March. At the event, speakers including Barbara Tsai, co-founder of the HAERT program and a mental health professional, discussed academic stress from the eyes of teachers and students.

“We talked about our traditional values that came from our parents or the ideology that we live by based on things that have happened in our lives,” Desai said. “We candidly talked about money, career trajectory and parental pressures.”

The webinar used guided questions and followed the discussion structure of the YouTube channel, Cut; students took part in discussing hot topics by turning their cameras on and off in agreement or disagreement.

The members are also working on the first issue of their magazine, “Toga Cares,” where students submit pieces of self-expression through art, photography or painting.

The club also plans to create wellness kits and spaces on campus for student well-being and mental health by partnering with other clubs such as GenUp and Yoga for All.

“Some challenges would have to be consistent involvement which is something all clubs are going through,” Fayad said. “It feels like another Zoom meeting, which makes it hard because people are tired of them.”

Despite the Zoom fatigue, Fayad hopes to increase club participation through more outreach and projects. After the club’s efforts with the Mental Health Initiative (MHI) in hosting educational webinars, they have seen an increase in club membership.

Recently, the club decided to combine with Wellness at Toga, a coalition between groups focusing on similar goals of healthy lifestyles.

“Health is one of the pillars of sustenance for all of us. The high school years are a critical time for growth and the opportunity to listen to new ideas and prepare to face the real world,” Desai said. “I think that the Healthy Living Club helps students separate from the stresses of school and focus on the bigger picture: nurturing yourself.”