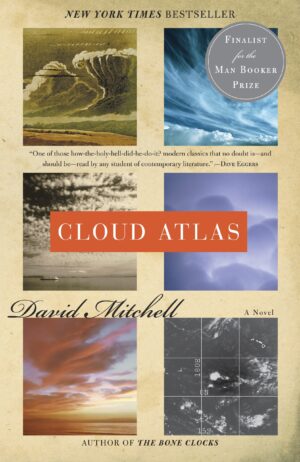 “A book consisting of six separate but connecting stories set across six different periods in time. Each story has been chopped in two and symmetrically placed in the book.”

While it had nothing to do with the plot itself, this blurb was what caught my eyes when I came across “Cloud Atlas” by David Mitchell. My first reaction was utter confusion: What in the world does “chopped in two and symmetrically placed” mean? I took the mystery as a challenge and, as a firm believer of reading the book before watching the movie, set out to read.

Before I begin extolling the virtues of the book, I’ll admit I had a rather embarrassing hiccup: I initially downloaded the book from vk.com, only to realize, 100 pages in and after noticing that everything felt a bit off, that I’d been reading a random book tucked into the digital cover of “Cloud Atlas.” I’ve yet to figure out which mediocre book I read by mistake, but I’ll take it as a lesson against using dubious means to satisfy my literary thirst.

When I finally had the correct book, I groaned at the first page, which appeared to be some kind of 1800s journal entry I’d had more than enough of in APUSH. But after pushing myself through the archaic language of the first page, I was thoroughly hooked.

No amount of explanation can illustrate the structure’s sheer brilliance, but the best way to put it is that the six storylines are arranged as follows: 1a, 2a, 3a, 4a, 5a, 6, 5b, 4b, 3b, 2b, 1b, with each “a” and “b” corresponding to halves of a story. Each story has indeed been chopped in half and arranged like a symmetrical sandwich.

The magic, however, lies in how the six stories maintain an intricate connection to the other stories, despite each being written in distinct styles and voices.

The first, set in the 1800s, is told through the journal entries written by Adam Ewing, a lawyer sailing on the Pacific. The second, set in the 1930s, is a series of letters from young musician Robert Frobisher to his lover Rufus Sixsmith. While composing the titular “Cloud Atlas Sextet,” Frobisher comes across the old journal written by Ewing.

The third, set in the 1970s, is a third-person omniscient political thriller in which journalist Luisa Rey tries to reveal the corporate cover-up of an atomic plant malfunction discovered by Sixsmith, now an old scientist. Rey finds the letters written by Frobisher and tracks down a recording of his sextet. The fourth, set in the present times, is a first-person account of Timothy Cavendish, an elderly publisher who happens to edit a manuscript of Luisa Rey’s story.

The fifth, written as a Q&A interrogation, is set in a futuristic dystopian world in which the main character Sonmi-451 watches an old movie on Cavendish’s incarceration in a prison-esque nursing home. The sixth, set in a post-apocalyptic primitive society, is a campfire story told by Zachary, a tribesman who worships Sonmi as a goddess.

The storyline I love the most is that of Sonmi, and the book does a stellar job of illustrating her transformation from a thoughtless restaurant server to a strong woman of exceptional intellect, an essential part of her becoming a revolutionary leader. To me, the most memorable scene is of Sonmi facing harassment and intimidation when she attends a university lecture because she is the only clone among natural-born humans. It parallels empowering real-life stories of the first people of color and women in educational institutions.

Another compelling story is that of the rather mentally unstable Frobisher who was driven into his suicide by a variety of factors including sleeping with his mentor Vyvyan Arys’s wife and pursuing Arys’s daughter. The moral ambiguity and borderline-delirious passion (think Alan Turing from “The Imitation Game”) possess an unusual charm that makes Frobisher’s tragedy extremely powerful.

Upon finishing the book, I immediately launched myself into the movie, a 2-hour-and-51-minute project directed by Lana and Lilly Wachowski and Tom Tykwer, starring Tom Hanks and Halle Berry. I was curious how the movie would be able to pull off the ambitious novel structure, which must have been difficult even considering the movie’s hefty length.

I found that the six storylines become inter-spliced with logical connections — such as escape scenes being grouped together — and occasional overlapping voice-overs. Rather than the book's “Russian doll” structure, the movie is more of a “mosaic,” quoting from Mitchell’s afterword. As such, the distinct stories, from historical drama to comedy to dystopian science fiction, spanning from 1849 to 2321, are woven into one.

The highlight of the movie lies in how each main actor also acts as minor characters in other storylines. With masterful make-up and effects, they portray characters of different ages, genders, and races, bringing home the theme of human souls migrating through time.

Plot changes are inevitable when making a movie from a book, but I’m glad that the storylines largely remain faithful to the original novel. However, it did fall short of the book in my favorite stories, both of which underwent significant changes.

In Sonmi’s story, the movie barely touches on her intellectual journey. Rather, her thirst for knowledge is replaced by a romance with Hae-Joo Chang, a commander in the revolutionary force.

I partially understand the movie’s attempt to sketch a character arc of an emotionless clone discovering love. However, in order for Sonmi to become that revolutionary who drafts and orates a powerful manifesto, her transformation can only be achieved by self-driven intellect, not damsel-in-distress love. Sadly, the scenes of Chang the Prince Charming pulling off macho martial arts moves while Sonmi stares on with wide eyes are quite laughable.

The second shortfall, perhaps due to my personal taste, lies in Frobisher’s storyline. In place of the book’s messy plot, the movie props up a neat story: Frobisher’s mentor Vyvyan Arys attempts to take credit for the former’s “Cloud Atlas Sextet,” threatening to reveal Frobisher’s bisexuality as blackmail. Enraged by Arys’s derogatory language, Frobisher shoots him, albeit non-lethally, before finishing his composition in hiding and committing suicide.

Granted, by shifting the focus to Frobisher’s bisexuality, the movie is able to use the tragic love story as a societal critique, just like how the other storylines critique racism, corruption and poor treatment of elders. However, in being so neat, the movie’s version of Frobisher’s story also becomes too predictable, losing the enticing complexity the book bestows Frobisher.

I can go on about the differences between the movie and the book and what I prefer from each, but I’m not surprised that both received widespread attention at the time of their publication (2004) and release (2012) because of how unique they are. It is also unsurprising that the reception is widely polarized, since the innovative structure can easily be seen as a show-off.

The question of how we should react to these two unprecedented works is best posed by Frobisher on his sextet of the same structure, “Revolutionary or Gimmicky?”

Does it matter? Because either way, the story is not something you’ll ever forget. So, rather than debating the question, I’ll simply enjoy this beautiful work and its exquisite and quotable lines.