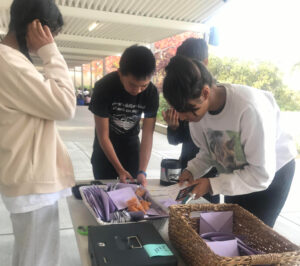 Photo by courtesy of Ethan Yang
The sophomore class office sells Candy Grams in front of the student center on Oct. 28.

Permalink
The sophomore class officers mainly plan on hosting boba fundraisers, while the junior and senior class offices are looking to branch out to new items and possibly some on-site restaurant fundraisers.

The first thing most people see when they walk into school activities secretary Anna Ybarra’s office is a giant calendar marked up with school events. While setting up fundraisers, this is also the first place sophomore class treasurer Ethan Yang goes.

“We need to make sure there are no other fundraisers from other classes or clubs going on the day we want to hold a fundraiser,” Yang said. “We don’t want to interfere with other school efforts.”

After securing a date, Yang fills out a fundraiser request form for approval from Ybarra. Although he, as treasurer, has the specific duty of filling out forms, planning fundraisers is primarily a group effort by each group of class officers.

Each one tries to have around six fundraisers per semester, and for each, the officers go through a process with advertising, contacting providers and physically setting up the fundraiser.

After receiving approval from the activities office, class officers first contact the organization supplying them with goods for discounts in order to maximize profits. For instance, before hosting boba fundraisers, sophomore class officers contact Ten Ren Tea or other stores for bulk discounts on orders of around 100 teas.

Starting roughly a week before the event, the class officers also post on their Instagram every day or every other day to promote. This year, class officers have been moving advertising away from Facebook and physical posters, as Yang feels not as many people see or notice them in comparison to Instagram.

“The hardest parts of developing fundraisers are organizing and finding the right date and then making sure we can actually contact who we need,” Yang said. “Some people just don’t respond, which makes it hard on our timeline.”

Nevertheless, the entire process of setting up a fundraiser usually takes about two weeks, with the sophomore class already having six planned this semester. Five events have already taken place, including their fruit kabob fundraiser at the Food Truck Fest on Aug. 16, class T-shirt fundraiser from Aug. 4 to Sept. 2, boba fundraiser on Oct. 19, Candy Gram fundraiser from Oct. 25 to Oct. 28 and class hoodie sale which launched on Dec. 14.

According to Yang, they will likely stick with selling food items in front of the student center after school for future fundraisers.

“Fundraisers where we sell boba in the quad are usually our best,” Yang said. “Sophomore class office hasn’t done any fundraisers on-site at restaurants, but if they’re successful [in other classes] we might try some this year. They’re a little bit harder to manage and set up than just calling and ordering.”

Apart from one instance last year when the class was just able to break even after their table broke and a large portion of their teas fell, they generally raise about $100 per boba fundraiser, as they usually buy 100 teas for $4 each and sell out at $5 each in around just 15 minutes. While some of the money raised goes toward buying items for other fundraisers or rally supplies, the majority goes toward prom fundraising.

“Students can fill out the form and say what they want,” Yang said. “They might want doughnuts or McFlurries or just something new, and then we could include some of those fundraisers. That’s where we can try different things.”

“It was just because it’s a different one that we’ve done,” he said. “Boba kind of gets old, but it always sells out, so we always do it.”

So far this year, they have sold class shirts, boba, Krispy Kreme donuts and instant ramen as their fundraisers along with flannel pajama pants pre-ordering from Nov. 3-17.

The junior class officers’ biggest struggle with trying a variety of approaches has been a lack of purchases. When they sell items on the quad steps, it is often tough to reach their goal of selling out.

“Sometimes we have to beg people to buy some stuff,” Rich said.

Nevertheless, they still make around $100 to $150 per fundraiser.

The junior class also branches out to fundraisers on-site at restaurants. In setting these up, Rich said the officers first find a restaurant such as Togo’s where they want to fundraise and email the owner to ask if they can hold a fundraiser event.

Following this, they negotiate prices, usually asking for around 20 percent of every sale that they make to be donated to a Saratoga High. Additionally, they try to establish the fundraiser to last for at least three days if possible, though some places like MOD Pizza only allow one-day campaigns.

Although the junior class will be doing some boba fundraisers similar to the sophomore class, they also have on-site fundraisers planned for MOD Pizza, Yogurtland and a few other restaurants this year. Rich said they are going down a list of local businesses or easily accessible nearby places to fundraise at.

The senior class officers have also experimented with a variety of items. Though they did the classic boba fundraiser on the quad steps on Sept. 27, they sold Chipotle chips at the Aug. 16 food truck fest, sold Costco pizza at the Dec. 9 night rally and are planning a samosa fundraiser in spring semester as well as possibly a hot chocolate one around the time of college decisions.

Senior class treasurer Kayla Steele said their boba fundraisers generally make about $100 while pizza can make up to $200 or $300 depending on where they buy from. They aim for at least four or five fundraisers a semester and, like the other class officers, their funds all go to pay for prom.

“Prom is really, really expensive, so there’s not really a certain amount [we aim for each semester],” Steele said. “But we want to make at least in the high $1,000s by the end of the school year.”

Steele said that last year, the junior class officers made around $1,500, which they look to add onto this year since the senior class fully funds prom each year. The more money they raise, the cheaper prom tickets will be because the majority of prom funding comes from ticket sales.

According to senior class president Allison Tan, prom will cost around $50,000 this year, and with around $17,000 raised over four years of parent donations and fundraising, she expects tickets to be around $150.

The senior class officers will continue fundraising efforts in hopes of making tickets cheaper or adding extra attractions to prom such as prom. Steele said that planning and executing fundraiser ideas is generally pretty easy for them.

“We don’t throw ideas out and ignore them,” Steele said. “We just have ideas set in stone and our success rate is usually around 90%.”

Still, there are times when their ideas fizzle out due to complications with providers. Last year, the junior class wanted to work with Taco Bell and McDonald’s, but they either could not negotiate a margin that would make them enough profits or ran into scheduling conflicts, Steele said. In these cases, the class officers turn to more reliable alternatives such as places they have worked with before like Cafe Lattea or Ten Ren Tea, where Tan works.

Steele believes boba has been their most successful fundraiser even though pizza fundraisers generate more money because of boba being more convenient to set up and its popularity making selling out easier. For last year’s food truck fest, the junior class officers were planning to sell Costco pizza and pre-ordered it, but when they went to pick it up, they were told the order wasn’t placed.

“We had to be back at school in an hour and it was a Costco which is already far enough,” Steele said. “We had to rush and get everything and then bring it back. We barely made it, but we sold out and made around $300 so it turned out good.”

They have not had any such stressful experiences with boba fundraisers, and Steele said the hardest part about boba is transporting the teas from the store to the school. Because there are many crates, class offices have to ask maintenance for a golf cart, so Steele recommends fundraiser organizers to have a plan beforehand to make sure everything runs smoothly. Like Rich, Steele also has some tactics for encouraging students to buy.

“If it’s hot out, I’ll definitely just reiterate the weather,” she said. “Sometimes I like to kind of personalize it by calling out friends or people I know or bargain. But usually, if we’re selling at a decent rate, I don’t have to do it.”

Despite fundraising brainstorming and preparation often being tedious, the class officers generally find their efforts fulfilling in contributing to funding class events.

“I find the most satisfying part to be selling out,” Yang said. “It’s rewarding to see the funds coming in because then you know you did a good job.”