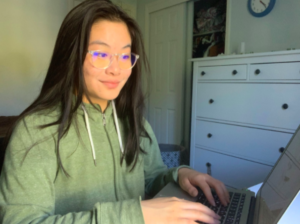 UCLA freshman Connie Liang logs onto her laptop to watch her online lectures.

Class of 2020 alumna Connie Liang sat in her room and hurriedly logged onto her Common Collaboration and Learning Environment (CCLE) dashboard. It was the first day of her virtual freshman year at UCLA in early October and she was scrambling to find the Zoom link to her early morning chemistry lecture.

Although all her class links were supposed to be posted on the CCLE site, the Zoom link was nowhere to be found. After 10 frantic minutes of clicking and scrolling, Liang checked her class’s student-made groupchat.

As it turned out, since it was UCLA’s back-to-school week, or Week Zero, her professor had decided to record and post lectures asynchronously.

Like tens of thousands other students across the nation, Liang is attending her freshman year of college from home as a result of housing restrictions universities have put in place to combat COVID-19 on campus.

UCLA drastically reduced housing openings for students in hopes of regulating the campus population. According to UCLA’s housing website, in order for students to be able to secure housing on campus, they had to meet a difficult set of criteria, including being housing insecure or , residing in housing that is “not a safe or appropriate environment.”

Although Liang has been living at home in Saratoga, she said that it hasn’t been too hard to reach out and make new friends at her new school.

“Socially, everything’s very accessible online,” she said. “A lot of people in my classes have reached out to me, and I've also been able to reach out to other people too.”

Liang said it was easiest to make friends with people in her classes or in the same clubs she was interested in.

“Sometimes it's hard to keep in contact with people,” Liang said. “There's just so many people messaging back and forth and so many different group chats being created to the point where it's overwhelming.”

Class of 2020 alumna Anishi Patel, who has started her virtual freshman year at UC Berkeley, has found it harder to make friends virtually.

“It’s so hard to meet new people if you don’t have a group project or lab or something that you need partners for,” Patel said. “Clubs and seminar-based classes help, but honestly, I’m not sure any of my online friendships will last once in-person schooling resumes.”

Unlike UCLA, Berkeley doesn’t require students to meet a set list of qualifications in order to apply for or receive on campus housing, so Patel said around 20 percent of Berkeley’s freshman class is living in dorms on campus.

She added that many Berkeley students who chose to stay home for safety — despite the lack of a real college experience — harbor “bitterness” at students who are currently living on campus and partying.

“It feels like we’re doing our part to slow down COVID, but there are still people who are deciding to party and hang out with large groups of people on campus,” Patel said. “It feels like a slap in the face.”

Despite the frustration that comes with having to stay home, Patel said that virtual learning still has some silver linings, like saving money on housing and having a more palatable and relaxed learning schedule.

Liang, however, mentioned that the virtual setting has made it harder to get help outside of class. Virtual office hours have become more crowded than usual since students don’t need to put in as much work to attend the office hours.

“Of course you can still ask the professor a question. But who knows how many people are in line?” Liang said. “If you were in-person you would have to make that real effort to walk into the building and walk into the office, but not now.”

Liang said that, if all goes according to plan, she is planning on renting out an apartment in Los Angeles with her would-have-been college roommates to live in during the winter and spring quarters.

“Living someplace else would make it feel more like the beginning of college because right now it doesn’t feel like it,” Liang said.

Patel is also considering living in an apartment because current Berkeley dorming prices are more expensive than surrounding apartment rental prices and because the Berkeley dorms have a lot of COVID-19 regulations to follow.

“It’s just that Berkeley’s not the safest college town, so my parents are on the fence about me getting an apartment,” Patel said. “Otherwise, it seems like a great option, and I can see why people would prefer that over the dorms right now.”