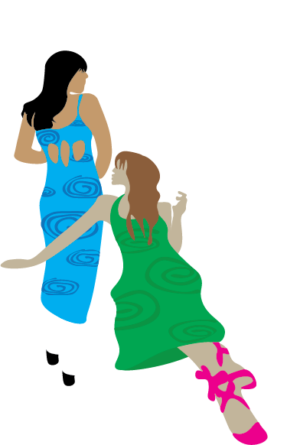 2021 has seen numerous clothing trends from brightly colored floral dresses to patchwork jeans to variations of the House of Sunny Hockney Dress.

This transition isn’t shocking, though; fashion trends tend to repeat every 20-30 years. However, as apps like TikTok became more and more popular, this trend cycle has started to shorten, with many negative results.

TikTok has over 1 billion users, with around 60% of TikTok’s users between 16-24 years old. The rise of microtrends is directly related to TikTok, while these trends existed before, the combination of short, captivating videos and an influx of influencers make TikTok the perfect place for microtrends to grow.

Most of these clothing trends start with celebrities and influencers. For example, after supermodel Kendall Jenner wore the Hockney Dress, dupes could be found on fast fashion websites like Shein, Romwe, Yesstyle and even Amazon. Predictably, these trends are often short-lived, fizzing out in a matter of weeks. By that time, however, hundreds of people have bought the dress and it is soon discarded in favor of the next trendy item.

There’s an easy solution to this for teen consumers: Stop buying things just because they are trendy. Whether that means finding your own personal style or buying pieces that are timeless, rejecting the whims of TikTok trends and consuming less has incredible benefits.

SHEIN chief marketing officer Molly Mio admitted in an interview published by Forbes that the store drops 700-1,000 new styles daily just to keep up with the ever faster trend cycle.

Just in the past few years, TikTok has cycled through so many aesthetics — the VSCO girl, the e-girl/e-boy, cottage core, dark academia, etc. Even though these styles might not have one piece of clothing that defines them, each has a few key pieces associated with it.

The environmental impact of these microtrends is enormous. According to UNEP, “if demographic and lifestyle patterns continue as they are now, global consumption of apparel will rise from 62 million metric tons in 2019 to 102 million tons in 10 years.”

Some people have tried to combat this by turning to thrifting and buying clothes second-hand. The second-hand apparel market was worth around $28 billion in 2019 and is expected to reach $64 billion in 2024, according to the 2020 Resale Report by ThredUp and GlobalData. Apps like Depop, Mercari and Poshmark also help followers to find items that are stylish, cheap and ethically made. But even thrifting has downsides.

Thrift hauls are well received on TikTok and YouTube, so influencers who have based their content on these hauls are under constant pressure to thrift more clothes to keep up with the demand for content. This also affects thrifting — pieces that get thrifted can be abandoned, or thrown away as quickly as fast fashion clothing.

The issue of overconsumption at thrift stores also creates a large problem for poorer people who actually depend on thrift stores for their clothes.

What happens when someone needs an affordable coat, but they’ve all been sold to someone who will throw it away after wearing it once?

In her book “From Goodwill to Grunge: A History of Secondhand Styles and Alternative Economies,” Jennifer Le Zotte writes that thrift stores, the organizations that run them and consumer interest all reveal “an increasingly intricate relationship between industrial capitalism, social welfare and mass culture.”

“What this accomplished, even back a century ago, was to constantly accelerate the demand for new clothing,” Le Zotte said in an interview with Vox. “The impetus to get rid of clothing is often charitable, but the more clothing that is contributed and viable, the more fashion cycles speed up.”

If people continue to thrift with the trends and do massive hauls, any good that comes from not buying fast fashion will be offset by the amount of waste created.

So what is the ethical path to follow? Keep and reuse your existing clothes in imaginative ways.

Instead of throwing out that old hoodie, break out some bleach and water and paint a fun pattern on the back of it. Or offer it to your friend or a sibling, or donate it to a local charity.

Think twice before buying a new piece of clothing, or wait a few weeks to make sure that you’re really interested in the piece before the purchase. Alternatively, you could limit yourself to a small number of purchases a month. If we all did this — and rejected the ever-changing TikTok trends — it would have an incredibly positive impact on the planet.