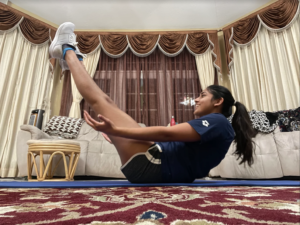 With every new year comes New Year’s resolutions.  Since I’m a competitive athlete restricted to the confines of my home, a few of mine are bound to be fitness related.

In my eight years of swimming, I’ve had multiple injuries in my back and shoulders from overuse. When I first tell people about this string of injuries, I generally receive confused looks — isn’t swimming a full body workout and one of the least injury-prone sports?

Yes, but there’s a catch: Swimming is a full body workout for the big muscles like the trapezius, abdominals, quadriceps and hamstrings. Because of this, the big muscles in my back continued getting stronger with repetition, but the smaller ones that support them, mainly my scapula, grew weaker. The scapula holds up the shoulder blades, deltoids and trapezius, so when it became incredibly weak, those muscles began to also wear and tear from overworking themselves to build support back up.

Since I’m not able to attend swim practices over quarantine, I have come to rely on a high intensity interval training (HIIT) and cardio workout schedule that gives me the same burn and fatigue I felt in the water. But even after being out of the water for months, I felt the same pain in my upper back.

I realized the problem with emulating being in the water was that it meant I was still overusing the same big muscles. That’s why, this new year, I’ve decided to push myself out of my exercise comfort zone and focus on rebuilding smaller muscles in my body for long-term injury prevention.

After doing some research, I added muscle-isolation workouts in the form of barre and pilates so I can strengthen and tone specific muscle groups at a time.

Barre is a hybrid of ballet and yoga focused on high-impact, low-intensity movements. You use only your body weight to churn out rep after rep of a specific exercise targeting one area of your body, and this aerobic exercise pushes muscles to the point of fatigue. Barre is known for toning muscles normally not used in other workouts, and because of its ballet roots, there is extra emphasis on proper form, leading to more injury prevention.

Pilates, on the other hand, is barre’s anaerobic counterpart. It moves between small and big muscle groups, concentrating on body stabilization and core strength. Unlike barre’s intense repetition, pilates is more yoga-based and focuses on holding movements or poses rather than repeating them. There’s a major emphasis on breathing and mindful focus on targeted muscles. It also requires more equipment than barre, like light weights or an exercise ball to practice balance.

To make sure I don’t injure myself simply by doing the wrong exercises, I turned to YouTube. My goal was to find two people whose videos I really liked for each type of workout so that I did not have to waste time searching for good workouts later on. After I felt comfortable enough with the moves, I could start crafting my own. For those getting started, I highly recommend Lottie Murphy and Move With Nicole for pilates and POPSUGARfitness for barre.

The great thing about these modes of exercise is that both improve flexibility and agility while also aiding injury prevention through aligning the body and allowing proper functionality. Because of all the problems in my shoulders, my current posture is as curvy as one of those Silly Straws I used to drink out of as a kid, so hopefully this balancing conditioning fixes that as well.

Fixated on a diverse at-home fitness routine, I have started the first two weeks of the new year doing cardio on Monday, barre on Tuesday, HIIT on Wednesday, pilates on Thursday, barre on Friday and HIIT on Saturday, with Sunday being a rest day. While I’m sure the days might get switched around, I already feel a new energy within my workouts.

I feel excited to discover new techniques and exercises, and my body feels a little better because it’s not overworking the same muscles and feeling the same continual soreness. With this muscle lengthening, I hope I will be more in tune with my body once I’m able to get back into the water, and my bigger muscles will find their support again. Until then, though, I know this new journey will ease me into a less injury-prone lifestyle and into a better 2021.