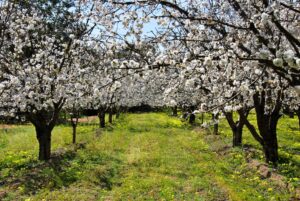 Photo by City of Saratoga
The Heritage Orchard blooms in spring.

Permalink
The orchard, located next to the Saratoga Library, changed contractors to Orchard Keepers.

The Saratoga Heritage Orchard, located between the Saratoga Library and City Hall, signed a new contract on May 4 with Orchard Keepers, a Santa Cruz-based gardening business, a move that raised questions about the future of the orchard.

Designated as one of the city’s Heritage Landmarks, the 13.9 -acre property remains one of the few original orchards still existing in the city. Although the spot has undergone many changes over the years, new contractors plan to plant new trees that weren’t originated in the city, utilizing techniques that differ from those historically used on the orchard.

Senior Ryan Jang said he didn’t feel very good about the new change. Because he lives very close to the Saratoga Library, he often walked through the Heritage Orchard to and from Redwood Middle. He said he feels pity knowing the original orchard will only live in his memory.

“To be honest, I just feel so surprised about this upcoming change,” Jang said.

On the other hand, junior Cameron Nguyen said he wasn’t worried about the changes.

“It really depends on the person,” he said. “Obviously it’s important to remember your roots and maintain heritage status but, at the same time, getting new trees is not necessarily destroying history, it’s just supplementing it with something else.”

The past contractors, the Novankovich family, disked the soil and used conventional and heritage farming practices for the past 40 years. Nguyen said he had no problem with the new techniques as long as they don’t damage the soil or environment.

Despite the controversy around the new trees and a changing environment, Saratoga’s Heritage Orchard should still be for generations to come.