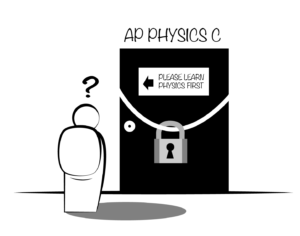 Saratoga students jump at the chance to take AP and Honors courses. The new AP Physics C class is no exception, with 41 students enrolling in the course for the 2021-22 school year, the first year it will be offered at SHS.

The course aims to teach the curriculums for both AP Physics C Mechanics and AP Physics C Electricity and Magnetism (E&M) and will be offered only to students who have already taken the AP Physics 1 and 2 tests. Students are highly recommended but not required to take AP Calculus AB beforehand.

Undoubtedly, introducing the new course is great for students who would like to take a college-level physics course that teaches physics along with calculus. It is especially beneficial since many colleges only accept the AP Physics C tests to satisfy physics prerequisites for new students. However, the value of the class is severely undercut by the stringent requirements for students who would like to take the class.

Requiring the AP Physics 1 and 2 tests forces students to not only learn redundant material, but also study much more material than they need in order to succeed in the class, potentially rendering them unable to take other classes that they may be interested in.

To begin, AP Physics C overlaps significantly with the current AP Physics class, which covers the AP Physics 1 and 2 curriculums over the course of a year. AP Physics C Mechanics covers seven of the 10 units of AP Physics 1 in slightly more depth, teaching the same equations but giving more mathematical justification for deriving them. AP Physics C E&M focuses on the three E&M units from AP Physics 2, but teaches students how to solve problems involving differentiation and integration. In both cases, the core concepts are a strict subset of those taught by AP Physics, and the only additions are more complex problems involving calculus.

In fact, the two classes overlap so much that many students at Saratoga High often simply self-study the remaining portions of AP Physics C to take the C exams after taking AP Physics. And at  Los Gatos, where AP Physics C is offered without a prerequisite, the majority of students take AP Physics or AP Physics C, not both. Evidently, the material is similar enough that students who take AP Physics might as well learn AP Physics C in parallel on their own instead of spending an entire year relearning the same material.

If anything, AP Calculus AB should be the prerequisite for the course and AP Physics the recommended prerequisite. The course assumes familiarity with calculus concepts, and learning how to differentiate and integrate on the spot is difficult, especially considering the abundance of rules and problem-solving strategies involved. After all, the class is AP Physics C, or calculus-based physics; it isn’t physics-based calculus.

Having AP Calculus AB as the sole prerequisite for AP Physics C also allows students to take more science classes that they may be interested in. With the current system, if students do not self study physics, they would have to take AP Physics in junior year and AP Physics senior year. The extra year of physics takes away a potential year of AP Chemistry or AP Biology, classes in which they would learn a lot more than retaking physics.

If AP Calculus AB became the only requirement for taking AP Physics C, with the math prerequisites at the school being much less stringent than those for science classes, high achieving students can take AP Calculus in sophomore year and then take AP Physics C in junior year.

Even if they take AP Calculus in junior year, they can take AP Biology or AP Chemistry in the same year then use their newfound calculus skills for AP Physics C in senior year. Making these tracks available to students is especially important considering that AP Physics 1 and 2 does not count for prerequisite credits at most colleges while AP Biology, AP Chemistry and the AP Physics C exams all do.

One argument against dropping the physics prerequisites for AP Physics C is that students often need a stepping stone before being thrown into a tough class, just as Chemistry Honors prepares sophomores for taking AP Chemistry the following year. However, juniors and seniors are not sophomores; after taking two years of basic sciences, they have the maturity and academic toolbox for managing rigorous classes. AP Calculus is not, by any means, an easy class, and if students can succeed in it, they will be just as ready for AP Physics C as any student who has already taken AP Physics.

It seems like a no-brainer to change the prerequisite structure for the new course. The current system only forces students to learn the same concepts over and over again, negating the benefits of introducing AP Physics C to the school. By making AP Calculus AB the only prerequisite for taking the class, the school can ensure that students are not only prepared for the class but are also actively learning. AP Physics C is an amazing opportunity for students, but the school should have the right prerequisites to keep it that way.