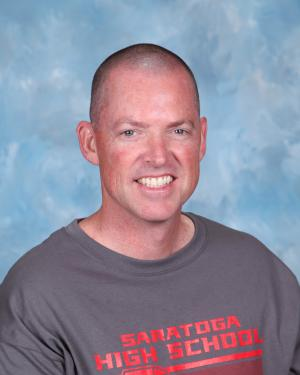 On Aug. 13 and 14, students tuned into virtual Zoom webinar presentations hosted by assistant principal Brian Thompson and Brian Safine, director of human resources at the Los Gatos-Saratoga Union High School District. While many upperclassmen immediately recognized Safine and Thompson from previous years at Saratoga High, most other students were not familiar with the two longtime SHS administration members due to the many changes in administration over the past two years.

Throughout the past school year and over the summer, the administration team underwent multiple changes. Halfway through the 2019-20 school year, then-assistant principal Brian Safine left the school to start working as the district’s human resources director. Safine’s absence left a vacancant assistant principal position, which PE teacher Rick Ellis filled on an interim basis for the remainder of the school year.

Over the summer, the makeup of the administrative team changed again. Because former Los Gatos High principal Kristina Grasty stepped down from her role to become an assistant principal there, Thompson returned to SHS to fill Safine’s spot. This meant Ellis returned to the classroom at the end of his interim role.

Thompson said that one of the most challenging parts about switching between the two schools over the past two years was having to constantly leave the people he was working with.

“I have great relationships with teachers, staff, students and parents at both schools, and it's difficult to leave people that you care so much about,” he said.

Still, Thompson said that he is glad to be a Falcon again. One of the things he is enjoying most about being back is re-immersing in the Saratoga student community.

“It's nice because we don't have to go through the learning curves,” he said. “I already know the students and the programs, so it's helped me start off well because I've been able to problem-solve things as they come up because of my past experience.”

Another perk for Thompson was that he gets to go back to working with a team he’s already deeply familiar with.

In addition to changes on the Saratoga High campus, the district placed Paul Robinson, who retired in 2019 from being SHS’s principal, into an interim role as the principal for Los Gatos High for ‘20-’21.

Mohnike said that having Robinson on the Los Gatos administration team has made it easier for Los Gatos and Saratoga to collaborate on inter-school meetings and projects.

“We do a lot of inner collaborative work with the Los Gatos administration and meet monthly in admin team meetings for the whole district,” she said. “Having Paul Robinson over there is awesome because we know him so well.”

“Coming back to Saratoga is like coming home,” he said. “Imagine if you have a college kid and they’re gone for a while, and then come back home — it just feels awesome.”