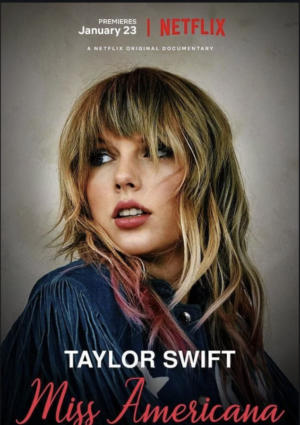 “Do the right thing. Do the good thing. And obviously I’m not a perfect person by any stretch; but, overall, the main thing that I always tried to be was the good girl,” singer and songwriter Taylor Swift says in the new documentary “Miss Americana.”

“Miss Americana,” released on Netflix and in a few select theaters on Jan. 31, is directed by Lana Wilson. It follows Swift through her journey of being in the limelight of fame for nearly 15 years and reveals the obstacles she overcame as a young, impressionable megastar.

Swift begins by addressing the stereotypes that her managers and fans wanted her to enforce. Pressured to portray the role of the innocent good girl that was pushed onto her, Swift discusses her struggles with the media dictating her every decision. As a result of growing up in the industry, she said that the constant push to be picture perfect resulted in her mental health deteriorating and her eating disorder intensifying.

“It became really terrifying for anyone to even know where I was,” Swift says in the documentary, “and I felt completely incapable of doing or saying anything publicly, at all.”

Swift has recently disclosed her struggles with anorexia nervosa, which, according to MedPageToday, is a distortion of body image and intense fear of gaining weight. Swift said in her documentary that she had gone down to a UK size double zero as a result of her condition.

“I thought that I was supposed to feel like I was going to pass out at the end of a show, or in the middle of it,” Swift said in her documentary. “Now I realize, no, if you eat food, have energy, get stronger, you can do all these shows and not feel fatigued.”

Swift also talked about her struggles of speaking out after getting sexually harassed by DJ David Mueller in 2013. She opened up about Mueller suing her for defamation and her countersuit against him. Despite the verdict ultimately siding with Swift, she was initially terrified of speaking out.

“People have been largely very supportive of my story since the trial began in August, but before that, I spent two years reading headlines referring to ‘The Taylor Swift Butt Grab Case’ with internet trolls making a joke about what happened to me,” Swift said in an interview with Time in 2017.

Another celebrity documentary has also been recently released, this one about singer Justin Bieber. Released as a series on YouTube, “Seasons” portrays his struggles with drug addiction, Lyme disease and life with his wife Hailey Bieber. “Seasons” was directed by Michael D. Ratner and had its first four episodes released on Jan. 27.

The series begins its documentation from the  cancellation of Bieber’s 2015 Purpose tour, after Bieber took a mental and emotional break from performances, and follows his up to the release of his new album “Changes.”

The fifth episode of the documentary series focuses specifically on Bieber’s health after drug use as a result of his recent Lyme disease diagnosis. He discusses his first experience with drugs and how his early entrance into fame increased his dependence on them.

“It was just an escape for me,” Bieber said in his docuseries. “My experience was in front of cameras and I had a different level of exposure and people. I never had the reliability and the accountability and all these things that make you understand how the world works.”

Bieber addresses his failure to maintain sobriety and his mental health, referring to his struggle with anxiety. He, soon after, opens up about how during his recovery, he discovered that he had Lyme disease.

Lyme disease, as defined by Dr. Erica Lehman, is the fastest growing bacterial infection that causes the neuropsychiatric symptoms of mood changes, irritability, depression and anxiety. Bieber has also been diagnosed with Epstein Barr, commonly known as mono.

Bieber describes his own motives for taking a break and getting better and also talks about difficulties on the path to recovery. He said his music has suffered as a result of his bad health, which was one of the reasons he needed to take time off to focus on himself. His other motivation was for his personal life.

“I’m committed to getting better and committed to doing whatever I have to do whether it’s inconvenient or not, because I know ultimately it’s not only for me, but being the best me is gonna help me be the best husband, the best father, the best friend I can possibly be,” Bieber says in the documentary.

Both documentaries include personal and emotional stories from these celebrities’ lives that reveal how life for celebrities is not as perfect as it seems. Many of them battle their own issues unknown to the public’s eye in the hopes of fulfilling the persona of a put-together celebrity. Behind the scenes, however, life is not as easy as it seems.

“When you’re living for the approval of strangers, and that is where you derive all of your joy and fulfillment,” Swift says. “One bad thing can cause everything to crumble.”