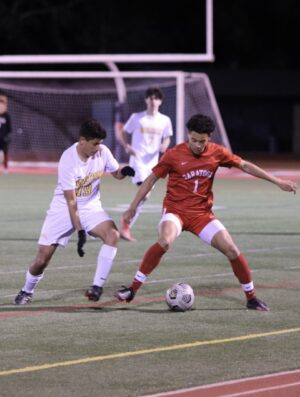 As the final whistle sounded, the dejected boys’ soccer team  walked off the pitch with the scoreboard reading 2-1 in favor of Milpitas on Feb. 1.

Gone was the initial excitement that the Falcons began the league season with.

“That game basically threw away all of our chances for CCS,” senior captain midfielder Shaheen Masoumi said. “It’s very sad.”

With a  4-5 record in the league this season in the SCVAL-El Camino league, the overall total record now stands at 7-6-1, lowering the team’s chances for making CCS. While the league season began with three consecutive victories, injuries and a string of sidelined players resulted in losses to Lynbrook, Wilcox, Fremont, Milpitas and Monta Vista.

Despite the losses, hopes still remain for finishing the season as a unit, with playing wanting to renew the initial team chemistry that allowed them to start the season strong.

“We’re just not getting the results we want,” said senior goalie Mason Manzagol. “There’s only so much I can do in goal, but if we don’t play together and as a team, we’re not going to get the results that we want.”

With the season coming to a close soon, three matchups remain against Milpitas, Lynbrook and Wilcox. While the team’s morale has been hurt by the recent losses, players haven’t given up.

“We’re all frustrated with the amount of losses we’ve been taking,” said senior center defender Sahil Shaik. “But we’re hoping to do better things from here on.”