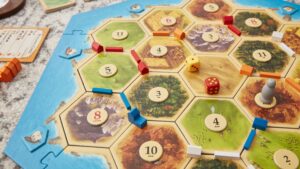 Regardless of how much work an individual family member may have, every family has one activity they’ll make the time for. As I grew up, playing board games — especially the Settlers of Catan — took center stage every Friday night in the Chen household, no matter how busy we were.

My oldest sister, Yining, introduced me and my other sister, Megan, to Catan when I was in second grade. Since Yining is 12 years older than I am and 10 years older than Megan, board games were a parent-approved way for everyone in the family to have fun playing with one another, despite differences in age.

When Yining went to college, she took the weekly board game nights with her, and I realized how much playing Catan with our family meant to me. Megan and I grew to treasure holidays like Christmas and Thanksgiving when Yining came home for a few weeks and we played Catan almost every night; even now, the tradition of Christmas-night-Catan lives on in our household.

To me, Catan’s a great game to play in any setting: Not only is it easy for beginners to pick up, but it also offers incredible depth for more dedicated players.

In Catan, players must build roads and settlements next to resource tiles, with each tile producing one of five resources whenever its respective dice is rolled. Resources can be used to build more settlements, as long as they’re connected by roads;  upgrade existing settlements into cities to gain more resources; and purchase development cards with special effects. To win, a player must reach 10 victory points, with each settlement counting as one point and each city counting as two points.

Catan mixes the exhilarating nature of Monopoly’s random chance with a significant level of skill expression; every action has a tradeoff, as players must decide which subgoals they want to prioritize. Players may also trade resources with an internal bank as well as with other players.

Trading with others allows for various levels of bluffing and strategizing. Players must decide whether achieving a goal is worth allowing another player to potentially achieve their goals.

These minor subtleties make every game unique, especially since the board’s 19 tiles can be placed in any combination. Combined with the skill and luck involved in a game, Catan serves as a great game to play in any setting, regardless of how laid-back or competitive the players are.

In my family, Yining and I are generally hypercompetitive and play to win, whereas Megan plays more so to have chaotic fun — for example, she’ll often purchase suboptimal cards that attack other players just to throw a wrench in things. Since she prefers hindering others rather than moving herself closer to victory, she naturally wins the least percentage of games, but she has the most fun.

Even now, we continue to play online, despite Megan going to college in New York amid a global pandemic.

Regardless of whether the game is played competitively or for fun, with or without expansions, Catan is always an adventure.