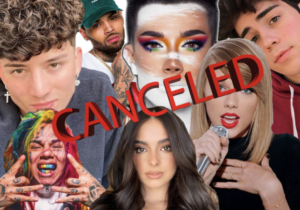 From President of the United States, Donald Trump canceling the NFL for “disrespecting” the country and flag to YouTuber James Charles being accused of queer-baiting, cancel culture is a common occurence these days. In recent instances, the act of “canceling,” a mass denouncing of a public figure for disapproved actions or behaviors, has demonstrated itself to be full of inconsistency, false accusations, lack of necessary legal action and incompetence.

According to a research report published by Vox, cancel culture started to gain traction around 2016 to 2017 on Twitter before it gained widespread relevancy. It has traditionally been a way to check a celebrity from engaging in bad behavior. When it works, it sometimes seems justified if the famous person’s actions are egregious enough to be considered problematic.

For example, old videos show YouTuber Shane Dawson making racist jokes and raunchy comments about children recently surfaced; these showed him to be — or have been — a racist and possibly a pedophile. Before these revelations, he had a following in the tens of millions. Efforts to cancel him reduce his following significantly.

However, one of the major problems with cancel culture is its inevitable inconsistency. Because influencers have different demographics within their followings, certain circles online will allow behavior that others would find unacceptable. While the public did not spare Dawson for his misdeeds, others’ crimes have seemingly been overlooked and their careers spared.

The public has been lenient with the careers of Chris Brown, who has assaulted women, and Tekashi 6ix9ine, who constantly says the n-word even though he’s not Black, sexually exploited a minor and has had several other serious allegations brought against him.

Besides meriting widespread condemnation, these celebrities have committed serious crimes that require legal action, which the public has only marginal influence on.

There is a line that needs to be drawn between "cancelworthy" and "criminal." The leniency given to criminals is indicative of how unwieldy cancel culture has become.

In the case of TikTokers Tony Lopez and Benji Krol, who have recently been exposed for grooming minors and taking advantage of their young fandom, cancel culture has arguably proved to be an obstacle against legal action. It allows for the focus to switch from taking legal action to harming their publicity instead.

While the two have been called out and canceled all across social media, there is little to no focus on fighting for legal action against the two, nor any visible support online for the actual victims of the incident. While the public feels morally superior for canceling them, the actual issues may continue and they may not be brought to justice.

Furthermore, the prevalence of cancel culture and its power to affect influencers’ careers long-term have led to repeated instances of false narratives being weaponized against public figures.

This was shown in 2016, when Taylor Swift got canceled following a drama with celebrity couple Kanye West and Kim Kardashian.

The conflict began when West implemented offensive lyrics about Swift in his song that she had allegedly never agreed to.

The situation escalated when Kim called Swift “a snake” on social media, which led to a wave of mass online hate toward Swift, forcing her to disappear from the public eye for a whole year.

It was only a year later that a call recording cleared Swift’s name. However, the damage was done and Swift had suffered unfair consequences.

In a lot of instances, cancellation is arguably a form of cyberbullying. People often forget that celebrities are people. Constantly being in the public eye does not make them any less human, yet every one of their actions, choices and words is analyzed and theorized over.

It is certainly important to hold people accountable for their poor behavior, but not in a way that allows a false accusation to incite waves of hate and death threats.

Apparently, this is not the case when it comes to cancellation. Children as young as 13 make one mistake and the internet doubles down on their families, schools and communities. Skai Jackson, an actress mostly known for her role as Zuri in Disney’s 2011 TV show Jessie, has a Twitter page where she exposes people who have said the n-word slur, often minors and children, and displays their information for her fanbase to find them and “ruin their lives.”

She recently doxed a 13-year-old child and Jackson’s widespread fanbase allegedly got him expelled and his parents fired from their jobs.

Occurrences like these are not uncommon, especially on platforms like TikTok and Twitter. For the children on the receiving end, their names are forever marred at an age during which they are likely still discovering what it means to be a good person.

If online communities looked to educate instead of ruin and stopped picking and choosing which actions are worthy of cancellation, media interaction between public figures and their audiences would be much more genuine and effective, and influencers would be allowed to grow and change like the normal people they are.