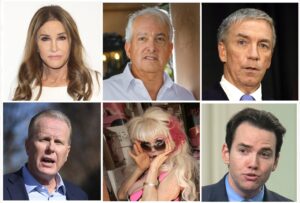 Six of the 46 potential candidates to replace Newsom as governor if the recall election succeeds. Polls suggest that even if Newsom is recalled, none of the candidates will receive more votes than him.

Permalink
The election is designed in such a convoluted way that any incumbent candidate could likely be replaced with a significantly less popular governor.

California governor recall elections, such as the one Newsom faced on Sept. 14, are simply political maneuvers by a minority of overzealous conservatives in a predominantly blue state. Given the ease of starting a recall in the state, they occur with astonishing frequency. Not only does this repeatedly distract the incumbent governor from running the country due to the risk of being removed from office, they also impose a significant cost on both the state and the governor.

Proponents of the recall criticize Newsom’s policies: the favoritism of the interests of foreign nationals over American citizens, the highest taxation rates among any state, the extremely high homelessness rates, the lowest quality of life out of any state and the highly controversial handling of the pandemic. Still, many others have praised him for his steadfast sincerity and ability to take action even under pressure.

Regardless of individuals’ opinions on the incumbent governor’s policies, he was elected to the governorship in a fair, democratic manner. The same cannot be said of the upcoming recall election, regardless of its result. At its very core, the election is unjust and unconstitutional in spirit if not in fact.

First, starting a recall election in California is notoriously easy — organizers of the recall need the signatures of only 12 percent of voters from the most recent election, which is far less than the percentage required in other states. In fact, every California governor who has served over the past 60 years has faced a recall effort. A total of 55 governors have faced a recall election, and there have been a total of 179 recall attempts against publicly elected officials in California.

One of the primary instigators of the recall election was the fact that, despite releasing advice to Californians telling them to stay home and avoid gatherings, Newsom was found enjoying a posh dinner at a restaurant, with other fellow lobbyists, without a mask on. This supposedly reflected on the hypocritical nature of the governor and his policies.

Despite these anti-Newsom feelings, however, we should consider whether the gathering was truly enough cause for him to face a recall effort. Most removals of an elected public official, such as the president, can only occur if the official commits a crime relating to their duties in office.

By making recall elections easy to start, the state continually puts its officials at serious risk of being removed from office for what are generally mild infractions. It is quite difficult for an incumbent governor to be liked by more than 88 percent of the public, and hence 12 percent of people will generally dislike him or her, virtually guaranteeing a recall effort. No governor has avoided this since the ludicrously easy recalls were introduced to California in 1917.

As an analogy, imagine if the president could face an impeachment trial if only 12 percent of U.S. voters want them replaced. Even presidents such as Abraham Lincoln, George Washington and John F. Kennedy never had more than 88 percent approval from the public. The existence of political factions and parties make it difficult for any candidate to have nearly unanimous support.

While most governors leave office unscathed, recalls should be saved for situations where the governor has clearly abused his position of power, committed a serious crime or both.

Additionally, voter turnout is always relatively low in off-cycle elections. The current format of the recall is such that the minority who support the recall are more likely to vote, which will skew the election disproportionately in their favor. Furthermore, voters in off-cycle elections generally skew older, whiter and more conservative, a recent study led by the University of California, San Diego, found. These issues are inherent to any off-cycle election, however, and cannot be easily remedied.

The frequency of recall elections also distract the incumbent governor from dealing with more pressing issues that have been plaguing California for decades, such as homelessness and a high cost of living. Instead of doing their job, their attention and tens of millions of dollars are diverted to winning an election. Regardless of the outcome, this is inefficient.

One solution to these issues would be to reduce the frequency of recall elections by increasing the percentage of voter signatures required to put the recall into motion. States such as Kansas and Louisiana require 40 percent and 33.3 percent, respectively, and have far fewer recalls.

Another issue lies in the format of the recall. Voters first must decide whether the incumbent governor should be removed from office. If so, they then select one of the several candidates seeking to replace the incumbent as the next state governor. On Tuesday’s election, there were 46 potential candidates. As long as a majority of voters cast their ballot to remove him, the candidate for replacement with the most votes on the ballot among the remaining becomes governor.

Already afflicted by a lack of voter turnout, the election only requires candidates to gain the support of a minority of voters in order to oust and replace the incumbent governor. In a way, the election is always a challenge for the incumbent before any votes have been cast.

Winning a recall election is an incredibly high bar for a governor to achieve, even democratic ones in a predominantly blue state with 64 percent of votes in the 2020 election going to Biden and Harris. Instead of defeating any individual candidate, he or she must defeat all of the potential candidates combined.

There is an incredible power imbalance, with anti-recall votes being as much as six times as powerful as recall votes. The cornerstone of any democratic election is to value the thoughts and opinions of each voter equally, but this is being neglected in the recall election. In fact, that would make the election simply unconstitutional. The Supreme Court Case Wesberry v. Sanders ruled that all votes must be considered equally when electing a representative to the Congress.

The addition of the incumbent governor’s name on the second question would also require voters to take on more responsibility when choosing to recall him. Upon doing so, they can compare the different, less popular candidates and make a more informed decision, comparing them to not only each other, but also to Newsom.

In a way, the recall election is simply a power grab by Republican minorities to undermine Newsom’s influence and power. At nearly every level of the recall system, the organizers of the recall gain a slight advantage.

Due to inherent flaws in the California recall system, it’s highly possible that an incumbent is removed from office and replaced with another, less popular governor. And provided that no crime was committed, replacing an incumbent with a candidate that far fewer people have voted for through the recall process is undemocratic and, at its core, unconstitutional.