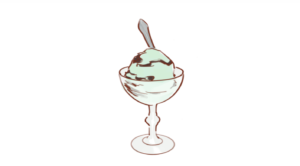 Photo by Leyna Chan
I am drooling.

Permalink
For the last time, it is NOT gross.

From this headline, one thing should be evident: I proudly stand by mint chocolate chip ice cream and have no shame about it. So, here is my defense of this truly superior dessert.

A quick google search about the controversy of mint chocolate chip ice cream tells me that BuzzFeed writer Sam Stryker clearly does not know what he is talking about: “If I wanted to eat something that tasted like frozen toothpaste, I’d stick a tube in the freezer and go to town. But ice cream that tastes like toothpaste? No thank you.”

Initially, the Kris Jenner GIFs in the story led me to think I was being “krissed,” or pranked — there’s no way someone could have actually written an entire piece hating on the best ice cream flavor, right? But, I soon was incredibly disappointed: Stryker was dead serious.

Scrolling through the comments, I could tell I was not alone in my disappointment. Stryker was indeed off his rocker.

As BuzzFeed user Randompotato so powerfully puts it, “[Sam,] the fact that you think mint chocolate chip tastes like frozen toothpaste makes me think that you’ve literally never brushed your teeth in your life.”

You tell him, RandomPotato! I wish I could copy and paste all the negative comments on here, but unfortunately, the Falcon is a family-friendly publication.

I realize at this point the article is turning into a hate piece against BuzzFeed, but I think Stryker’s use of unnecessarily harsh language — “it’s absolutely ludicrous,” “it just isn’t natural” and “some delusional people think mint chocolate chip ice cream is an acceptable “flavor” — justifies my behavior.

The only thing delusional and ludicrous is Stryker insinuating we should all instead have “vanilla ice cream like a normal person.” I would only consider putting vanilla ice cream in my mouth if I was allergic to taste.

I conclude with a heartfelt ode to this wonderful dessert:

If mint ice cream has a million fans, then I am one of them;

If mint ice cream has only one fan then I am that fan;

If mint ice cream has no fans, then I do not exist;

If the world is against mint ice cream, then I am against the world.