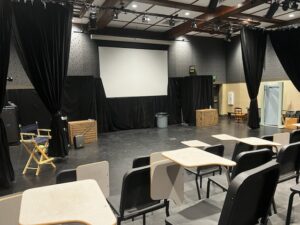 Photo by Dragon Neal
Los Gatos’s stage classroom, with desks and a projector set up.

The stage tech class was combined this year due to low enrollment in Saratoga High’s theater tech course and high enrollment in Los Gatos’s. The Saratoga students join 26 Los Gatos students to form the class.

Because the class now involves Los Gatos students, Brotzman had to adjust the curriculum of the course. His students worked on set pieces and other design elements for Saratoga productions last year.

“Instead of working directly on the Saratoga High fall play or the spring musicals, I am just really going deep into each individual section area of tech,” Brotzman said. Then, he plans to lead the class through doing all the design work for a play the class reads through.

Besides necessary curriculum adjustments to accommodate both schools, Brotzman’s unfamiliarity with the Los Gatos scene shop was also something to adjust to.

Although Brotzman has experienced difficulties with teaching away from SHS, some students are seeing benefits of the class.

Senior Dragon Neal said that although transportation is a hassle, they find it interesting to see the Los Gatos theater.

“Meeting and working with other students to learn at a place I don’t know has already been eye opening,” Neal said. “Having worked in one theater, getting to learn in another is an amazing opportunity.”

Both classes focus heavily on video editing and other digital media, which is a good fit for Brotzman, whose college studies included broadcast and filmmaking. Having experience with creating advertisements and similar video projects, he finds both classes a good opportunity to refresh his skills in video production.

With SHSTV’s student-driven nature, his role is mainly to advise and ensure the production is going in a “coherent and ethical” direction that reflects the school district’s culture.

According to SHSTV head producer senior Adam Xu, Brotzman is essentially “everything we as a team would want out of an adviser.”

“Mr. Brotzman’s given us a lot of space to run the class freely and to lead story production while also providing vital feedback to individual students and during studio days,” he said.

Taking on these two additional courses, Brotzman has transitioned into full-time teaching, and his role as McAfee Center manager has been filled by Christine Schwanhausser.

“Last year, I taught two classes and I ran the McAfee Center, and that split between teaching and running the center was much more stressful, because they are two totally different things,” he said. “This year, I’m able to completely focus on teaching, leading the drama department and helping with MAP, and that’s been much clearer.”