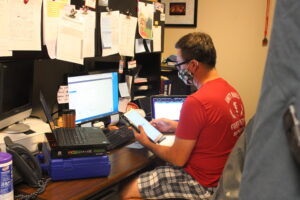 Before COVID-19 caused the school to close in-person schooling, Benjamin Brotzman oversaw the lighting, stage maintenance and set design, among other visual aspects of performances in the McAfee Center.

However, the shift to online learning was accompanied by a significant decrease in usage of the facility, which significantly impacted Brotzman’s work.

“Drama as we know it is taking an unneeded vacation,” Brotzman said. “We all want desperately to work on plays and musicals and we simply cannot do it the way we have been trained and the way we are used to.”

This is Brotzman’s fourth year working with the school. Prior to coming here in 2017, he worked at California Theatre Center from 2008-2012 where he met former drama teacher Sarah Thermond and began helping out with the drama program.

For about 175 days of the year, Brotzman works with school programs like drama and Media Arts Program (MAP) to set up the theater according to their needs. He arranges the furniture on the stage, focuses lighting equipment and placement, sets up sound sources and cleans the stage.

In addition to working with drama, music, MAP, guidance, administrators and district personnel to help host events at the McAfee, Brotzman usually manages the renting of the theater to outside groups for events such as speakers, concerts and dance recitals like arangetrams.

As part of his job, he is also a member of the district’s IT team, and as part of the group, Brotzman has now become the Zoom guru for the district, providing both students and teachers any technical support. He works behind-the-scenes in school board meetings, special events, town halls and other public meetings. He has also assisted various clubs and programs, including TedX, Leadership, MAP, ICAC and Saratoga RISE by hosting presentations.

Brotzman hosts most of the webinars in the district, and works with Saratoga High, Los Gatos High and the school district. Students are unable to create Zoom meetings and webinars with teacher privileges like recording the meeting, which is where Brotzman steps in. For example, he is able to make meetings with out-of-district people, as is usually necessary for club and district webinars.

Brotzman is looking forward to the drama department’s upcoming online film festival in January and hopes a full spring musical can occur in the spring — in other words, a return to his usual duties.

“I am very much looking forward to these projects,” he said. “For the spring musical [and the film festival], I will be designing and building the set and lighting. I do hope that [the students and I] will be able to return to campus to build the set as a group.”

Despite all the changes that have occurred and the shifts in Brotzman’s role on campus, he is grateful to be able to help in any way he can.

“I look forward to helping any and all groups that can use my help to make their art come alive,” Brotzman said.