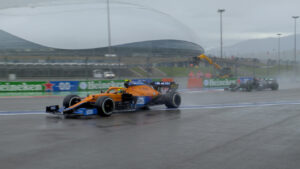 Photo by formula1.com
Norris slides off the track allowing Hamilton to take the lead.

Permalink
In a head-to-head competition, Lewis Hamilton prevailed at the Sochi Grand Prix after an unexpected spin-out from rival Lando Norris.

Formula 1, the pinnacle of motorsports, is a culmination of speed, power, and skill. The fastest cars on the planet made by the best manufacturers, with the most talented racers behind the wheel. You may not follow it, but take my word for it: You can’t beat the excitement of a tight race between talented drivers.

Here’s a taste of what you’re missing:

In a dramatic rain-assisted victory, British racing driver Lewis Hamilton of team Mercedes became the first Formula 1 driver to reach 100 wins while racing at the Sochi Grand Prix on Sept. 26.

During the penultimate lap, the leading 21-year-old Briton, Lando Norris of team McLaren, spun out, handing the victory to Hamilton in climactic fashion.

Norris, who was seeking his maiden win after winning the qualifying race, started favorably at the top of the grid where 40 percent of all wins are achieved from.

At the start of the race, Norris lost his leading position to team Ferrari’s Carlos Sainz but quickly regained the lead on lap 13 of 53.

On the other hand, Hamilton began from position 4 and dropped to position 7 at the first turn. Despite the slow start, Hamilton and Mercedes kept their heads up, relying on pit stops for fresh tires. This strategy allowed Hamilton to maintain a faster average pace that pushed him up to second by lap 23, only 13 seconds behind Norris.

By the second half of the race, the track grew increasingly slippery due to rainfall. Many teams decided to pit and switch to intermediate treaded tires, offering more grip and stability.

Both drivers initially declined their team’s recommendations of swapping to intermediate tires, but when Mercedes reported that the weather was worsening, Hamilton entered the pits and swapped tires. Norris, only four laps away from a win, decided to stay on the tracks: a fatal decision that resulted in a heartbreaking loss, spinning out on lap 51 and giving Hamilton the win.

For Hamilton, the race makes him the first Formula 1 driver to reach a unique milestone of 100 victories and 101 poles. P1, more commonly known as pole position or “poles,” is the lead position at the starting grid, achieved by earning the fastest time in the qualifying race prior to the main event.

Additionally, from this victory, Hamilton has also secured 25 points for finishing first. In each race, the top 10 fastest drivers receive points based on their place and the driver with the fastest lap receives a bonus. Having finished first, Hamilton retook the lead over his rival Max Verstappen from team Red Bull, increasing his chances of winning the 2021 championship.

At 36 and in his 15th season, Hamilton has displayed remarkable consistency since joining team Mercedes in 2013, achieving titles in every single season.

Hamilton described the race in a post-race interview with CNN as “bittersweet,” seeing his old team McLaren ahead. He credited Norris, saying that “[Norris] did such an amazing job; he had incredible pace. He is doing such a great job for McLaren.”

Despite his age, Hamilton looks to continue his stellar racing career, recently signing an extension with Mercedes until 2023.

“We’re entering a new era of racing, and I can’t wait to see what we’ll [Mercedes] achieve together,” he told CNN.