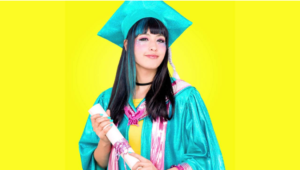 The album cover for “Intro Bonito,” the group’s second album, featuring Sarah Bonito on the cover.

The band’s songs not only sound amazing, but also answer age-old questions like how many shrimps you have to eat before you make your skin turn pink.

Until recently, I hadn't heard of the group Kero Kero Bonito, but it has quickly become one of my favorite artists. While I was listening to some music with strangers on Discord, I was extremely pleased to find that another stranger also enjoyed the hyper pop duo 100 Gecs and their ear-bleeding yet amazing music, so I took note of the other songs he queued up.

When “Make Believe” from Kero Kero Bonito started playing, another listener remarked that it was the “cuter and lighter version of 100 Gecs."

And honestly? She wasn’t wrong.

Kero Kero Bonito's songs have the same bizarre noises as 100 Gecs songs, but their style is drastically different; the lyrics are much brighter and the background noise is less abrasive.

Though they all feature Sarah Bonito’s vocals, Kero Kero Bonito’s songs still have a wide array of styles. When the British group, comprised of Sarah Bonito (stage name), Gus Lobban and Jamie Bulled, debuted, their music could be classified as electropop. This style persists for their first two albums, "Intro Bonito" and "Bonito Generation." In these, Bonito alternates between singing in English and Japanese, and the tunes are really catchy.

Her voice is commonly described as child-like, which is accentuated by the lyrics: “Mama says I can make it / I just have to work hard / Finish all of your homework / And then you will go far, will go far.” In my opinion, the best songs from "Intro Bonito" are "Sick Beat," "My Party," "Homework" and "I'd Rather Sleep." "Sick Beat," unsurprisingly, has a sick beat. "I'd Rather Sleep" is less peppy than the rest of the album, but it's relaxing and stunning in its own right.

"Bonito Generation" has a pretty similar sound as well, but I find the majority of the songs on the album more polished than "Intro Bonito." There aren't any specific stand-out songs, but the album is all around solid, so it's mostly just personal taste as to which songs are more enjoyable. That being said, "Graduation," "Fish Bowl" and "Hey Parents" are my favorites. All three songs are poppy, but if there's any I'd recommend in general, it would be "Fish Bowl."

Kero Kero Bonito's third album, “Time ‘n’ Place,” takes a different tone, though, and it has ended up as my favorite album of their works. It sounds a lot rockier, with prominent drum sounds and Bonito's singing more quiet and muffled in comparison. Bonito also doesn’t sing in Japanese in this album, which could be a plus or a minus depending on whether you like the Japanese sections. Apart from that, the tone is also a lot different from the first two albums, opting for a mix of melancholy and cheerfulness rather than just a poppy upbeat tone.

"Only Acting," "Dump" and "Make Believe" showcase the best of the album. "Dump" is probably the most calming song on the album, creating a melancholy tone performed with Bonito's child-like voice. "Make Believe" is on the opposite spectrum.

The lyrics are wistful (especially the fantastic chorus), which contrasts the overall upbeat tone of the song. My favorite, however, is "Only Acting." It's worth listening to the original version once or twice, but the song has some trippy editing near the end — worth experiencing, but not worth listening to on repeat. For that reason, I usually just keep the radio edit version of the song in my playlist.

I'm still patiently waiting for Kero Kero Bonito's next album. They haven't announced one yet, but there is an upcoming EP, "Civilisation II," on April 21, which is a half continuation of their work in "Civilisation I." "Civilisation II" will have three songs, and judging by the quality of the only single released, "The Princess and the Clock," the EP will be great.

"The Princess and the Clock" and "Civilisation I" use electronic music like the group's first two albums, but they sound almost futuristic at points. It's less experimental than "Time 'n' Place," but it's still an interesting style.

Thanks to an interaction with an online stranger, I have a new artist to obsess over and many songs to put on repeat before I inevitably get tired and find another short-lived obsession. Fortunately, with Kero Kero Bonito instead of 100 Gecs, I can queue songs without my friends berating me for damaging their ears.