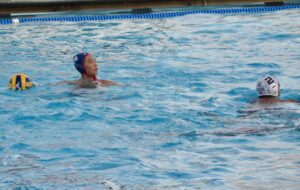 Senior Chris Wu surveys the pool for offensive opportunities against Wilcox. The boys went on to win 13-7.

The boys’ water polo team lost their 12-game winning streak Oct. 12 in an 11-4 regular season loss at home against their big rival, Lynbrook.

Despite the loss, players still like their chances to win the El Camino league championship after defeating all their other opponents. “The season was going well,” senior attacker Kian Kwa said. “We were feeling confident we would remain undefeated.”

The team’s success was unanticipated: Last season, the Falcons lost to Lynbrook and Harker and finished with a record of 8-4. After Harker joined the upper De Anza league and Wilcox returned to the lower El Camino league, Lynbrook became the key matchup for the season.

While the Falcons edged out a victory against Lynbrook during their first matchup this season on Sept. 21, they stumbled in the rematch. They started off strongly with a long, sharp goal from senior wing Daniel Jiang. But when Lynbrook answered with two goals in succession, the tide began to turn in the opposite direction.

“There was poor awareness, and we were making bad passes and not recognizing drops into the center,” Kwa said. “Our communication on defense was abysmal.”

On offense, the boys committed a season-high 16 turnovers.

“That was our worst game in this season I think, and that was their best game,” senior co-captain and hole set Kendal Jarvis said. “I was kind of concerned going into the game that we weren’t taking them seriously.”

For the first half of the game, the match remained close, with neither team able to open a lead of more than two goals, but through Lynbrook’s continued pressure, the Falcons’ defense eventually fell apart.

After outplaying the Vikings in the past, the team went into the game overconfident and unprepared, Jarvis said. They didn’t take Lynbrook seriously, and without a game plan, Lynbrook set the pace of the game instead.

“There’s a lack of mental fortitude for our guys, and it’s just because we’ve never been put in a situation where we needed to fight for something like that,” Jarvis said. “Some guys started to panic, and once Lynbrook got a lead of three, they just pulled away because everyone seemed to just give up.”

Additionally, Kwa said there was a clear lack of drive as players were going to practice late, adding that the team needed to work on their conditioning. Looking forward, the team will be taking practice more seriously in hopes of winning the league championships in late October and making it to the CCS tournament in November.

Despite the painful loss, Kwa sees the loss to the Vikings as a necessary setback and wake-up call.

“I definitely think this loss will make our team way better in the long run,” Kwa said. “We had a 30-minute discussion after the game where we really set a proper direction and purpose for our practices, reflecting on why we lost the game and how to improve in the future.”

The team is still seeded first within the El Camino League, and is set to play against Lynbrook again during the League Championships on Oct. 29 in their home pool.

“We still are looking to win the league championships and advance to CCS,” Kwa said. “I think we now want to re-establish dominance in our remaining games by absolutely destroying our opponents.”