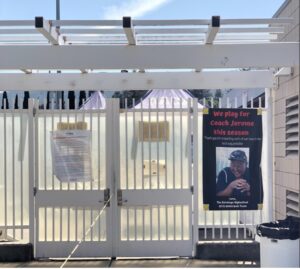 A poster of the smiling face of former coach Jerome Chung is taped onto the pool gate. His recent passing has impacted the water polo program greatly, with both the boys’ and girls’ water polo teams playing the season in his honor.

As junior Byron Jin approached the school pool for practice on Monday, March 29, he looked at the pool gate with excitement. From his car, he could hear the distant sounds of water splashing, teammates throwing balls, and people shouting. Jin eagerly ran through the pool gate, greeting his teammates, many of which he had not met for nearly a year.

Like other players, he found the walk to the pool was a bittersweet moment. The pool deck was surrounded by memorials reminding him of former coach Jerome Chung, who died on the morning of March 4 at age 37 for unknown causes.

With the recent passing of head coach Chung, a gap has been left in the coaching staff for the team. To fill the spot left by Chung, special education teacher Courtney Crase-Delp, a former SHS player and coach of the sport,  agreed to fill the role.

“The main focus of the season will be to build up water polo skills, improve individually and as a team and establish camaraderie between players,” Crase told The Falcon.

She said the passing of Chung was sudden for everyone, so the team is supporting each other even as they continue to grieve his loss.

“It’s a bit hard having to transition to a new coach since Coach Chung was a huge part of our last season,” said junior Daniel Jiang. “However, we’re all still doing our best to adapt to the new coaching and the new season.”

Following many delays due to safety restrictions imposed by the county, the district has allowed the boys’ season run from March 29 to May 27.  Due to the shortened season, the schedule this year will follow a double round robin schedule, with each team in the league playing each other twice. Like other sports, there will be no CCS or league tournaments and spectators during matches will be limited. The team will have its first match on April 14 against Los Gatos.

Players have been conditioning and working on ball work during practices to strengthen their individual skills and get back into shape after quarantine.

“In practice, we mainly focus on our individual handling of the ball,” Jin said. “We do things like swimming with the ball and passing to each other. We also work on our overall fitness with conditioning drills like squats or swimming without kicking.”

For example, a typical practice could start with a 200-yard swim and 200-yard free kick. After, the team will do legwork, consisting of exercises like “egg beaters,” a workout that requires players to move their legs underneath the water in quick circular motions that work on reinforcing the quadricep muscles. Then, the team will transition into more technical ballwork, including passing, with penalties like push-ups for dropping a pass.

For the boys on the team, being able to return and practice in-person again has been a refreshing experience and change of events from the usual remote learning.

“Going to water polo again allowed me to hang out with friends that I haven’t seen in many months,” Jiang said. “It’s a step toward finally returning back to normal life, which is great.”