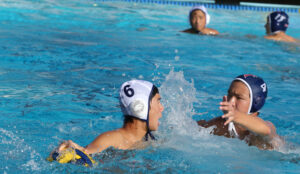 A change in coaching and young additions to the team prompts better outcome than the year before.

Bouncing back from two losses at the start of the season, the boys’ varsity water polo team is now on a seven-game winning streak as of Oct. 12, currently ranking first in the De Anza League. Led by new head coach Jerome Chung, the boys are looking to advance far in CCS.

Chung has brought many changes to the team, including new play strategies and training exercises.

“Not only are his strategies working well against other teams, his personality and passion for water polo is what differentiates him from our previous coaches,” senior field player Eng Kwa said.

Kwa is one of the main scorers on the team, contributing about three to four goals per game, more than a quarter of the overall team scoring per game. Other key players are sophomore field players Marcus Kuo and Kendal Jarvis and senior field players Grant Chen and Bryan Chu.

Chung is no stranger to coaching water polo having led the girls’ water polo team to an undefeated league record last year. With Chung leading the team by creating strategic plays, the team has seen great success, and their practices have increased in volume and intensity.

“The new coach yells a lot more than the previous coach, but he’s a good coach,” senior goalie Nima Aminzadeh said. “The strategies and plays are working out somewhat. They are working better than last year, where we had no plays and did whatever we wanted.”

Nonetheless, Aminzadeh said that there is still room for improvement. The team started the season with tough losses against Santa Clara and Harker on Sept. 10 and Sept. 26, respectively, both of which were close matches. The match against Santa Clara went into a sudden death thriller with the team just falling short of the win, 15-14. However, the team managed to pull ahead and maintain the lead in the second quarter against Harker, winning 12-10.

“We struggled against Santa Clara, but that was because it was our first game, and we were getting used to being a team,” Kwa said.

Despite the outcomes of the first two games of the season, the team has been improving, and the young majority of the team has quickly adapted to the quick pace and aggressive nature of varsity water polo.

“Some of our team is young, so they are not as experienced and still have room to grow,” Kwa said. “However, our team chemistry is pretty good, and we definitely have a lot of potential.”

The team is also improving because of having more physical conditioning during practices.

“One difference this year in goalie training is we do weight-belts, so that's more leg work during practice,” Aminzadeh said. “It actually helps a lot, because my legs are stronger now, so it's easier to block shots.”

However, the team still needs improvement, specifically in defending against other teams. During the game against Lynbrook, the team’s defensive line would sometimes break down due to miscommunication or wrong player rotation.

“I can partially depend on my teammates to defend, but not all the way, because they still can’t shot block,” Aminzadeh said. “That is where we need improvement.”

The team has also been practicing “how to make a move” against defending players when on offense. Previously, team players would be stuck, unable to get past a defender and losing the ball in a turnover.

The team has improved their defensive plays, implementing and testing a new strategy during the game against Milpitas. The team will continue to strengthen their defense by practicing in a tournament from Oct. 11 to Oct 12.