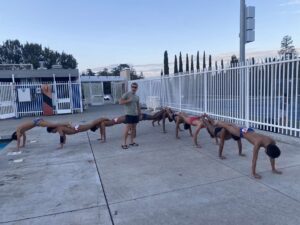 Permalink
It will take a lot of work from the team to dominate the league again.

Recap: Despite tying Lynbrook for the best season record, the boys’ water polo team was not able to beat Lynbrook for a spot in CCS.

From training in the weight room to squats on the pool deck, members of the boys’ water polo team have been putting in the work for their season. Due to a senior-heavy varsity team last year, the current team only has eight returning members. They have been preparing to play big minutes without breaks. After last year’s coach Mike Flemming didn’t return to the role,  last year’s team captain, 2022 graduate Kendal Jarvis, stepped into the role of coaching this year.

According to senior captain and right driver Keon Nikfar, matching the success of last season will be a difficult challenge. Many JV players have been bumped up to play varsity, but the team is still low on players and everyone has an important role to play in the team’s success.

The Falcons fell 20-6 to Mountain View on Sept. 20 and 8-4 to Santa Clara on Sept. 22. According to Nikfar, the team needs to communicate with each other and be more proactive.

“Right now we need to focus on working together instead of trying to play by ourselves,” he said.

“We have a roster with many inexperienced players, but with rigorous training we can gradually improve to get back to the level of success we had last year,” Nikfar said.