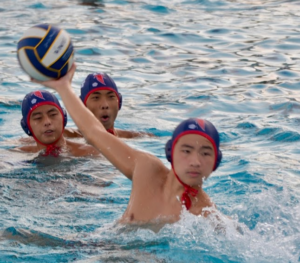 As the clock counted down to the end of the final quarter, senior Kendal Jarvis launched a long range shot at the opposing team’s goal. It hit the goalie’s fingers, then tipped into the net, scoring a point as the buzzer sounded; the Aug. 31 game ended with a decisive 19-6 victory against Santa Teresa High School.

The players attribute their success this season to the chemistry they have built over the years. According to senior set defender Chris Wu, the team has had time to develop mastery of their key plays, as most of the starter senior varsity players have been on the team for at least three years.

“Our sense of self-responsibility and pushing each other allows us to constantly improve ourselves,” said captain and attacker senior Marcus Kuo, who is currently the leading scorer of the varsity team. “We’re clearly a lot better than the other teams in our league.”

As the goalkeeper for the varsity team, senior Andrew Hong is satisfied with his current performance. “With my blocking, I think I’m doing pretty well and supporting my team,” said Hong.

Players also feel inspired to perform their best this season in honor of previous coach Jerome Chung, who passed away unexpectedly in early March at age 37. He was a beloved and essential part of the team, Wu said.

“We all want to make Jerome proud, and we know he would have expected us to perform well,” he said.

Indeed, the team has dominated the league thus far, with their closest match being a Sept. 21 game against Lynbrook. The game started slowly, with the score tied at 2-1 until the third quarter. However, senior Byron Jin scored a key goal in the third quarter to bring back the momentum, and Kuo scored multiple goals in a row. The team ultimately beat Lynbrook 8-2.

The win against Lynbrook was what solidified the team as the best in the league, Wu said, adding, “It was empowering to know we could beat the only other team in the league that hadn’t lost yet.”

Kuo said another factor that played a key role in the team’s success was the efficiency in their practices, facilitated by their new coach Mike Fleming.

During an average day at practice, the team starts off swimming. They then move to a half hour of warm ups, including various passing and shooting drills. Fleming usually helps less experienced players, allowing the seasoned players to train on their own.

“The coach knows that we have three years of experience and practiced a lot together before. For a good chunk of the practices, he just lets us do our thing,” Wu said.

The team has beaten every other team in the league and looks to round out an undefeated season. However, their goals extend beyond winning matches, as the majority-senior team will include only four current varsity players the coming year.

As the team will inevitably lose a lot of skill and experience in the coming season, senior Jaime Fernandez da Ponte hopes that the underclassmen players will take the opportunity in stride to improve and enrich themselves as players.

“It’s important to not be demoralized by losing — losses help shape the team and show errors,” Fernandez da Ponte said. “It takes years of losing games to start winning, and the process is the most important thing.”