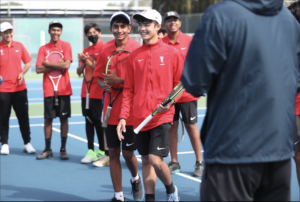 boys tennis
After a rough start, the team had a spectacular midseason comeback.

No. 1 singles player sophomore Kosei Ogata jumped across the court in celebration as the boys’ tennis team chanted his name. Ogata had just won his tiebreaker match, securing the Falcons’ win against Bellarmine for the first time in seven years and bringing the team into the semifinal bracket for CCS.

The 4-3 victory on May 9 came as a surprise considering Bellarmine has historically dominated the high school athletics scene. Yet, the team’s win was far from simple luck. It resulted from a culmination of strategy, hard work and consistency.

Despite a rough start to the season, the team made a strong comeback midseason, finishing with a 7-5 league record and placing 2nd in the De Anza League. Advancing into CCS, the team defeated Carlmont 6-1 and Bellarmine 4-3, but ultimately lost to Cupertino 6-1 in the semifinals. Nonetheless, the team felt satisfied with their results, having obtained the 3rd seed.

Across the season, the team encountered a number of challenges including the loss of key doubles players due to graduation along with a relatively young team: underclassmen accounted for 8 of the 14 players.

Co-captains seniors No. 2 singles player Anthony Zheng and No. 3 singles player Ben Bray said the overall youth of the team contributed to their early losses, as the team was still trying to figure out effective lineups and hone their skills.

“It was really just a matter of unlocking [the underclassmen’s] potential because they’re extremely talented and we simply had to spend time to gauge their strengths and weaknesses,” Zheng said.

In the end, the team’s decision to dedicate the first half of the season to training paid off as the team avenged their losses during the second half.

Bray noticed that as the team began racking up more and more victories, team morale shot up as well. He noted that near the start of the season many players found themselves unfocused and in low spirits going into their matches, which handed the opposing teams easy victories.

No. 1 doubles freshman Teddy Oyang added that the season proved to be a new experience for him and the other underclassmen, primarily due to the team environment.

“Tennis is usually an individual sport where players register and participate in tournaments by themselves or with a duo, but being on the team really helped introduce me to the concept of teamwork and how if someone wins their respective match, it doesn’t directly translate into a team victory,” said Oyang. “Cheering your teammates on and keeping them motivated is crucial to making sure we do our best.”

Oyang shared many memorable moments with the team including their big victory against Bellarmine, along with winning his last match against Cupertino during CCS with sophomore Luke Stratakos. That being said, Oyang feels that the most critical takeaway for him this season was being able to bond with the team and simply have fun on the court.

For seniors Bray, Zheng and Vignav Ramesh, this season marks the end of an old journey and a start of a new one as they head off to college to pursue their academic aspirations while also playing club tennis on the side.

Despite their departure, Bray and Zheng rest assured that the Falcons will only grow stronger thanks to the large pool of underclassmen who are very familiar with one another.

“I’ll definitely miss the moments I’ve shared with the team, and I feel quite sad leaving,” Zheng said. “However, I do look forward to playing club tennis while attending Northwestern and I’m sure that the coming seasons will be full of victories for Saratoga.”