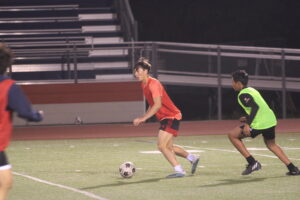 Photo by Emma Fung
Senior captain Dylan Sinton dribbles the ball across the field during a Tuesday night practice match.

Permalink
With their first league game coming up on Dec. 15, the seniors on the team are relishing their time together.

At their first preseason scrimmage against Homestead on Nov. 23, the Falcons were expecting a tough game. In the end, they lost 1-0 in a hardfought contest. No matter how the preseason goes, they are optimistic for a solid regular season that will qualify them for CCS.

The team practices Monday through Thursday and has mainly been working to improve passing patterns, ball possession and shooting under the guidance of coach Maximilian Dorling. For Sinton, the most important aspects of whole-team practices are to familiarize players with each other and bolster teamwork, especially since many players practice at separate soccer clubs during the offseason.

“We haven’t played together in a while, so I think the main thing that we’re focusing on right now is getting that chemistry back and having fun,” Sinton said.

One key loss they will have to overcome is junior striker Yul Hong, their prospective No. 1 player who now only plays club soccer. As for their next few games, senior center back Luke Wheeler is most looking forward to the rival game against Los Gatos on Dec. 15 after the team’s 1-0 win against Hollister on Dec. 8.

“We are looking forward to playing Los Gatos due to the obvious rivalry, but we don’t know how good Los Gatos is yet,” he said.

Wheeler said that above all, he wants to enjoy this season to the fullest, and despite having to lead the defense and distribute the ball to the midfield, he hopes to have the opportunity to score and play as a striker. Although he has played club soccer all his life, this is his first year of playing high school soccer. He believes it allows him to be more social because it is not as “intense or serious as club soccer.”

With a 22-person roster consisting of a majority of seniors, the team looks to make the most of their final year playing together.

“A lot of us, especially the seniors, have played with each other for a while, so just enjoying one final season together and ultimately winning would be our biggest goal,” Sinton said.